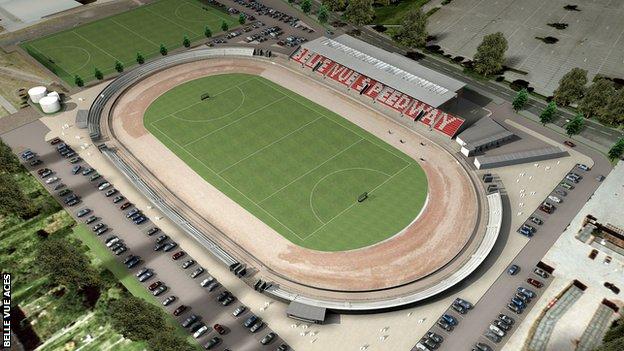 Plans for a new national speedway stadium have been approved by Manchester City Council.

The Belle Vue Sports Village would be used by Elite League side Belle Vue Aces and for international meetings.

It will now go to the planning permission stage and it is hoped the facility will be opened by March 2014.

The proposals include seating for 6,500 people, as well as a new national basketball centre, as part of the £10m development project in Gorton.

The council will fund the £4.5m building costs for the speedway stadium - a loan that will be repaid by the Aces through an annual rent as part of the club's lease agreement.

Speaking before Wednesday's decision, David Gordon - the chief executive of Belle Vue Aces - told BBC Radio Manchester: "It would mean everything. It would give us a sustainable future.

"Where we are now [at Kirkmanshulme Lane] was a temporary arrangement 25 years ago.

"We've been negotiating for this project for six years, so it is a significant day. It means so much to the club."

As well as creating a new national base for speedway and basketball, other sports such as netball and hockey are set to benefit from the new facilities, while a new grass rugby league pitch will also be installed.

Deputy council leader Jim Battle said: "The Belle Vue Sports Village represents an opportunity to bring enviable, world-class sporting facilities to East Manchester, as well as the national home of both speedway and basketball to the city, boosting grass roots sport and attracting some of the world's best athletes."