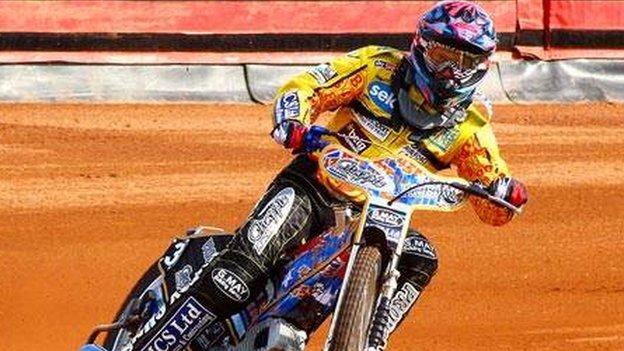 Birmingham Brummies left it to the last heat at Perry Barr to earn top spot in British speedway's top flight for the first time in their history.

Monday night's 47-43 win against Kings Lynn was secured only when Jason Doyle crossed the tape first in Heat 15.

That was enough to ensure the Brummies finished top of the pile, allowing them to select a play-off clash against local rivals Wolves, who came third.

The play-offs start at Monmore with next Monday's first leg.

After finishing ninth, then third, in their first two seasons since being welcomed into the Elite League, the Brummies' achievement in now coming top of the table continues the progress they have made since the club, which disbanded in the mid-1980s, was reformed in 2007.

But Brummies manager Phil Morris knows that there are still two major obstacles to overcome to reach their goal.

"Wolves are a solid side," he said. "I'm hoping we can keep beat them next week and finish off the job at home at Perry Barr in a fortnight's time.

"We had great support and that always helps. A few incidents also favoured us particularly with Josh Auty in Heat 14 but we'll take it and now look forward to the play-offs."

Auty's third place in Heat 14 was only confirmed after close scrutiny of the television footage to be sure that his bike had not crossed the white line.

But his point was allowed to stand, keeping the Brummies ahead by two points, which enabled Doyle, who top scored with 13, to clinch victory in the decider - and set up that rematch with Wolves.

"Birmingham comprehensively beat us earlier in the season," said Wolves owner Chris Van Straaten. "But it's up to us to make sure that doesn't happen again this time around.

""It's a level playing field for all four teams involved now."