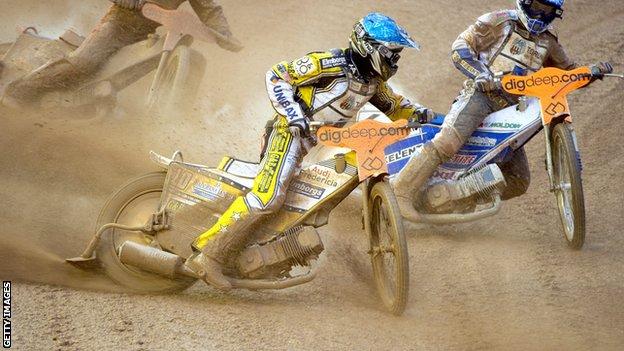 In a repeat of last year's final, reigning champions Swindon had a 10-point lead going in to Monday second-leg in Dorset.

"The whole team underperformed and let us down," the 32-year-old Danish rider told BBC Wiltshire.

"We didn't want it to come down to a heat 15 decider but it was actually decided in the heat before.

"Fair play to Poole, they were a lot better than us and are deservedly in the final."

Poole will now face Birmingham, who topped the Elite League standings at the end of the regular season.

Peter Kildemand top scored for the Robins with 9+1 but Andersen could only manage a below-par six having been hindered by a hand injury incurred during the European Championships in Poland.

"I was always going to be up against it due to my crash," he added.

"I spoke to Rosco [team manager Alun Rossiter] and he said there was no guest available so I said I'd give it a shot but doing your clutch-lever hand in is no good.

"My reactions weren't as sharp as normal. I did my best but it wasn't to be."

Although their domestic season has now come to an end, Swindon team-members still have the Elite League riders' championship to contest.

But Andersen admitted: "I'm pretty upset at the moment and I'd rather just pack it in than stick around.

"I'll probably think a bit clearer later and look forward to getting back on the bike, but at the moment I'm a little bit upset and I'd rather just say that's it."