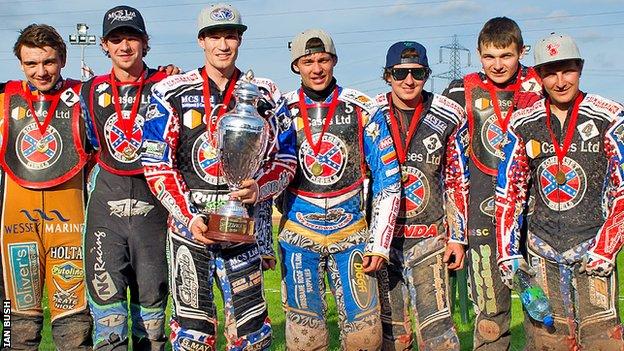 The Rebels, last year's Premier League Cup winners, lost the second leg 46-44 but secured the silverware with a 103-77 aggregate win.

"All the boys rode exceptionally well and although the hard work was done in the first leg, they still had a job to do," said promoter Debbie Hancock.

"Garry May [team manager] gave the boys a game plan and it worked a treat."

Somerset had a 28-point lead going into Sunday's meeting and although they took an early four-point lead in the second leg, the Rockets came back to level 21-21 at the half-way stage.

Three successive 5-1 heat wins put the hosts ahead and although they held on to win on the night, it was not enough to overhaul the aggregate deficit.

"Even though Rye House did open up a bit of a lead on us at one stage, we were never worried about losing control of things," added May.

"But we came back at them to such an extent that we almost snatched a draw out of the match, but although we just missed out on that, we will be heading back to Somerset with the cup."

Somerset will now turn their attention to the Premier League play-offs, after they finished top of the table at the end of the regular season.