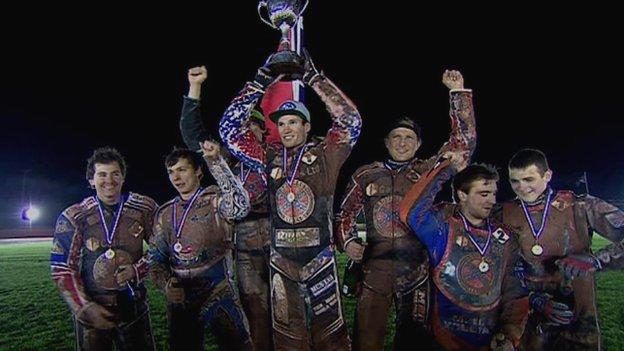 Somerset Rebels won the Premier League for the first time after beating Edinburgh in the play-off final.

Somerset finished top of the table at the end of the regular season but trailed by two points going in to the second leg at the Oak Tree Arena.

It is the Rebels' third piece of silverware this season, following victories in the Premier League Knockout Cup and Pairs Championship.

Last year they narrowly missed out on their first title, losing by one point in the play-off final against Scunthorpe.

Captain Jason Doyle, who top scored for Somerset with 11+1, told BBC Points West: "It's unbelievable, the Hancocks [promoters] have worked all their lives for this.

"It came down to the wire. We needed two points in the last race and it's all gone to plan.

"It wasn't the best conditions to be riding in but it showed what a team we have.

"We've worked so hard and didn't make many changes this year and it showed, as all the boys looked after each other."