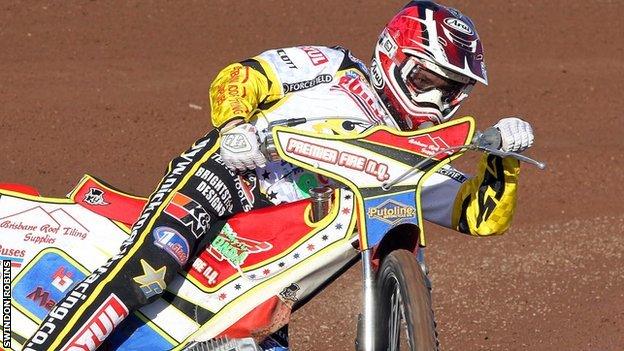 Swindon manager Alun Rossiter says it would be a "smack in the face" if rider Nick Morris leaves the Elite League club for Premier League side Sheffield.

The Robins have accused Sheffield of approaching the 19-year-old after he signed a new Swindon deal in December.

"It means we may well have to revisit our team plans and go in a completely different direction," Rossiter said.

In a statement on the Sheffield Tigers website, co-promoted David Hoggart said: "We were made aware of a statement issued by Swindon Speedway and because of the serious nature of the allegation we will be dealing with the BSPA on the matter."

Swindon have confirmed that Australian Morris has now requested to join Sheffield.

In a statement on the Swindon Robins website, Rossiter said: "If Nick leaves Swindon it will be a smack in the face for everyone who has shown their faith in him and the investment the club made in him."

Morris was set to ride for the Swindon Robins in the Elite League and appear for Somerset in the Premier League next season.

But the Rebels were forced to cancel his contract to accommodate Brady Kurtz.

"Swindon are considering their next move after learning of an alleged move by Premier League Sheffield to sign Nick Morris," read the club statement.

"Morris, who is highly rated by the club management, have invested heavily in the rider and in a transfer fee."