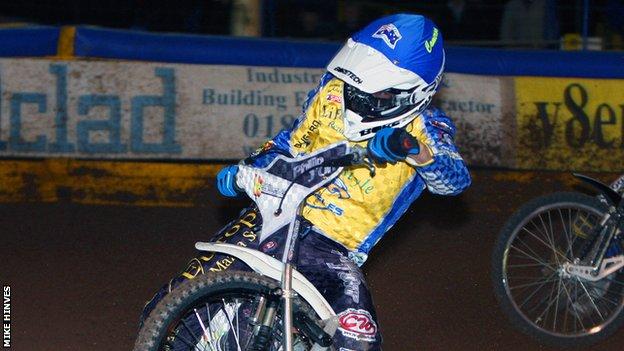 Eastbourne Eagles co-promoter Mike Bellerby is confident of success in the Elite League this season after completing their line-up.

The East Sussex club missed out on the play-offs in 2013, finishing eighth.

"We think we have put together the best top five that we can," Bellerby told BBC Sussex.

"We have put a team together that can really challenge. I think there is a positive atmosphere amongst the riders of wanting to do well."

He added: "We think we have a very powerful team for 2014 that should be challenging for those play-off positions.

"Obviously there are going to be some strong line-ups in the Elite League again but I think we have a match for everyone."

"As soon as we knew what the points limit was, which was set at the AGM as 32, we had a team in mind," Bellerby said.

"The top five we have ended up with is what we were after. There is some real potential there.

"Bjarne is back at number one and Cameron being back with us is great. Mikkel had a tremendous start last year and Kim came to us from Lakeside last year.

"They are all great riders and very capable of doing a job for us next season."

Bellerby has backed the decision to use National League riders as reserves at the British Speedway AGM, which was held in November.

"It is key for the future that we have got to bring on British talent," he said.

"We have had Tai Woffinden win the World Championship in 2013 and want the next Tais to be coming through the system.

"I think fans will react positively to this - to seeing the best British youngsters in the Elite League. For the future of British speedway I think it is exciting.

"In the past because of a lack of British riders we have had to go to other countries - places like Sweden and Denmark. We want to be bringing on our own British youngsters as they are the future of the sport.

"It will give them the opportunity to gain experience. Fans have liked to see the youngsters at Eastbourne and I think we have two good reserves with the potential to really take their careers forward."