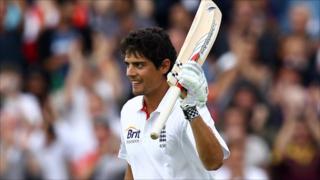 Sports Personality of the Year top 10 contender Alastair Cook reflects on his achievements this year.

Cook was part of the England side who won the Ashes in Australia on the way to becoming the number one Test team in the world, as well as taking the Man of the Series award.

The batsman was also appointed England one-day captain and immediately led the team to a home series victory over World Cup winners India, plus in the summer he made a mammoth 294 against India at Edgbaston, helping the national side cruise to a 4-0 series win.