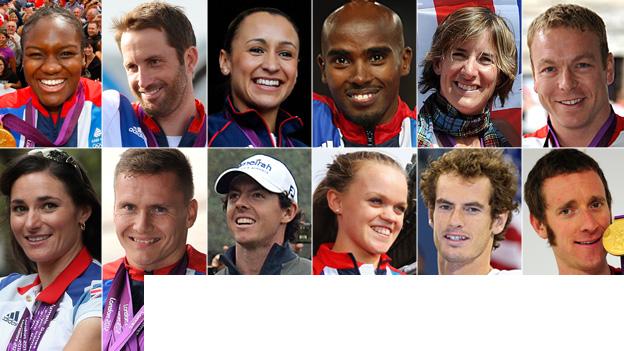 I hope you will agree that the shortlist comprises a fantastic array of sporting talent and rightly recognises those sportspeople that have delivered moments that brought the nation together during 2012.

In my previous blog, I outlined how the BBC had evolved the shortlisting process through the introduction of an expert panel, which included representatives from the national press and the BBC, former nominees and the chair of UK Sport.

It convened last Monday in the BBC's offices in Central London to come up with the shortlist, as well as deciding the Team of the Year, Coach of the Year and the Overseas Sports Personality Award.

I would like to take this opportunity to thank the panellists for their time and contributions.

I had the privilege of chairing the meeting; marshalling the debates in order to secure a consensus of opinion from around the table.

I started by asking the panellists for their views on the various awards - and the first point of consensus was just how difficult it would be to leave some very worthy candidates off the lists.

The panel also debated the criteria for the various awards and reviewed the lists of potential candidates to make sure there was no person or team that had been overlooked.

We had already extended the shortlist for the main award this year from 10 to 12, but at times we all wished it was nearer 15 or 20.

I was reminded that back in 1996, Great Britain won only one gold medal at the Summer Olympics - one of our panellists, Sir Steve Redgrave, securing that in the rowing pairs, alongside Sir Matthew Pinsent.

This year, Team GB notched up an incredible 29 gold medals, with Paralympics GB adding a further 34. It was very difficult to leave off Olympians and Paralympians of the calibre of, to name just a few:

The panel also reflected long and hard on the heroics of stars from other sports such as:

In any other year these sportspeople would probably be front-runners to win the overall award. If we ever needed reminding just how special a sporting year it has been, then the list of those sportspeople who did not make the final 12 is testament to that.

* Bradley Wiggins & Katherine Grainger do not have Twitter accounts

We had similar debates over the candidates for the Team, Coach and Overseas awards, with the added complication that we also had to pick the winners that will be announced on the night of the show.

This involved taking some very tough decisions and people's views will no doubt differ on the relative achievements of those in the running for each award.

It goes without saying that the success of all the sporting heroes from 2012 will be properly reflected during the programme.

The production team is busy trying to squeeze the action into a two-and-a-half hour programme - 30 minutes longer than usual but probably a few hours short of what they would like to work with!

I hope you will be able to join us as we broadcast live on BBC One, BBC One HD and BBC Radio 5 live on Sunday 16 December. The show starts at 19:35 and, once again, it will be the viewing public on the night that decides who will be crowned their Sports Personality of the Year.

Can you pick a winner?