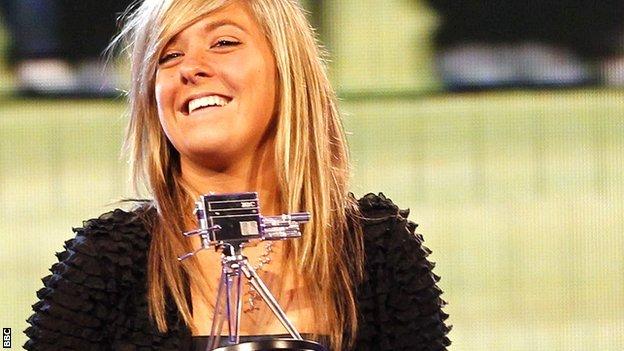 The 10 contenders shortlisted for the BBC Young Sports Personality of the Year 2012 award have been announced.

Who are the nominees?

Quillan Isidore, Siobhan-Marie O'Connor, Saskia Sills, Rebecca Tunney and Kimberley Woods make up the list of contenders, who all had to be aged 16 or under on 1 January 2012.

Last year's winner was golfer Lauren Taylor. She claimed the award after becoming the youngest winner of the Ladies' British Open Amateur Championship in June 2011.

Applegate is also 16 years old. The Norfolk-born swimmer won gold at the Paralympics in London after setting a new Games record in the 200m Freestyle S14 final.

Breen, 16, was part of the women's T35/38 4x100m relay team which picked up Paralympic bronze in London this summer.

Fifteen-year-old swimmer Craig was crowned the youngest Paralympic gold medallist at London 2012, after smashing his own world record in the 400m freestyle S7 final.

Tennis player Edmund, 17, is the 2012 US Open boys' doubles champion. He also reached the quarter-finals of both the French and Australian Open this season.

Golfer Hall is the number one amateur European female golfer and the 16-year-old is ranked fourth in the world.

Isidore, 16, is a BMX world champion in his age category after an impressive display at the UCI BMX World Championships in Birmingham in May.

At 17, O'Connor was the youngest swimmer competing for Team GB at the London 2012 Olympic Games. She formed part of the women's 4x100m medley relay team which went on to make the final.

Windsurfer Sills is a multiple youth world champion in sailing. The 17-year-old picked up European and national titles in 2012.

Past winners of the award

Sixteen-year-old Tunney was the youngest member to represent Team GB at the London 2012 Olympics and is a British all-round gymnastics champion.

Woods, 17, is a junior world champion in the K1W team event of canoe slalom, as well as a European gold medallist in the C1 women's event.

The shortlist was drawn up from nominations made by a panel of judges chaired by BBC Sport's John Inverdale.

As well as compiling the shortlist, the panel choose their top three and their winner by secret ballot.

For voting criteria on all the Awards, further information and updates visit bbc.co.uk/sportspersonality.