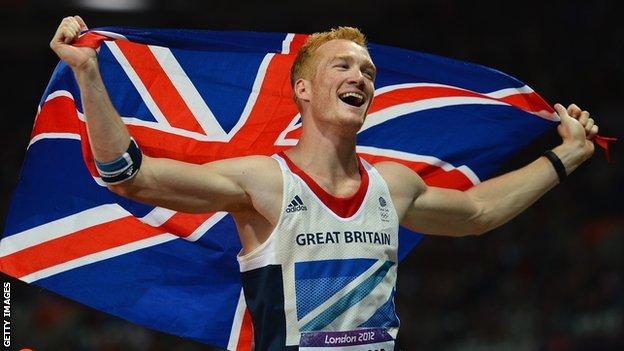 Britain's Olympic long jump gold medallist Greg Rutherford has won the BBC Sports Personality of the Year for the East of England.

"We were very fortunate to have multiple gold medal winners in this region and that made it much tougher," Rutherford told BBC East Sport.

"I was taken aback by it. It's absolutely lovely to win this."

The joint British record holder lit up the Olympic Stadium this summer on what became known as Super Saturday, an evening when he, Jessica Ennis and Mo Farah all claimed athletics gold for GB.

Speaking at the awards, held at the University of Bedfordshire, he added: "I came here thinking 'I haven't got a chance with Victoria Pendelton and Etienne in there, but it will be a nice evening'. All of a sudden your name gets called out.

"I'm from a great part of the country in the East and Milton Keynes especially has been very supportive. The people there always got behind me. Hopefully over the Games I was able to give them some joy.

"It's lovely having people telling you you've done well but ultimately I'm a long jumper and I need to go back to doing that soon.

"All of this after Christmas will be history to me and I can get back to jumping at the World Championships next year."

The Cambridgeshire sprinter produced a dominant display to set a Paralympic record time of 10.90 seconds on his way to beating legend of the sport Oscar Pistorius.

"It's always nice to come home. I came here last year and lost out to Jody Cundy (paracyclist) who was the better man," said the 19-year-old from Doddington.

"This year has just been fantastic. This is a great way to round things off. But it's not just for me, it's for the whole support system around us.

"Locally - my coach, mum, step dad - they've supported me the whole way, so it's as much for them as it is for me."

There were also awards for Peterborough's gymnastics silver medallist Louis Smith, who was recognised for being a Sporting Role Model, while Milton Keynes-based Red Bull claimed Team of the Year after winning their third consecutive F1 constructors' and drivers' championships.

Bedfordshire-born Pendelton was awarded the title of Olympic Legend after taking her overall Olympic gold medal tally to two at London 2012, while her sprint coach at Team GB Iain Dyer, from Norfolk, was Coach of the Year.

Young Sports Personality of the Year went to Norfolk's 16-year-old swimmer Jessica-Jane Applegate in recognition of her stunning gold medal victory in the Paralympic 200m freestyle.

Cambridge's Rob Huff's maiden World Touring Car title this season was enough to win him an award for Outstanding Achievement.

And Park Junior School from Wellingborough won School of the Year, while Hampton FC were named Club of the Year.