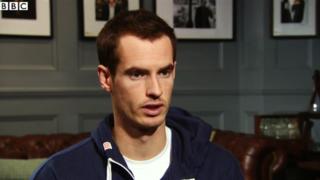 Sports Personality of the Year contender, Andy Murray reflects on his amazing year, which included winning an Olympic singles gold medal and his first Grand Slam with the US Open.

Murray, who is the first British male to win a Grand Slam singles title in 76 years, has been short-listed by an expert panel of sports specialists for the Sports Personality crown, with the winner to be revealed at London's ExCeL on Sunday, 16 December.