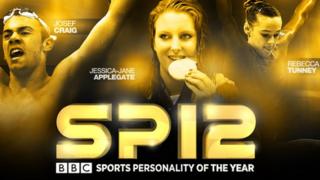 Jessica-Jane Applegate, Josef Craig and Rebecca Tunney are chosen as the top 3 athletes from a shortlist of 10 for this year's prestigious BBC Young Sports Personality of the Year award.

The top three, who all competed at the London 2012 Games, were revealed exclusively on CBBC's Blue Peter.

The overall winner of the award will be announced live on BBC Sports Personality on Sunday 16 December at 19:30 (GMT) on BBC One.