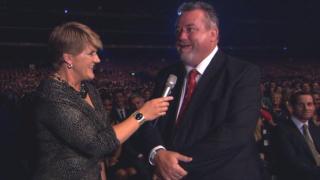 Bert le Clos tells the audience at the BBC's Sports Personality of the Year that London's Olympic crowd were an "example to the rest of the world".

The South African shot to fame after watching his son Chad beat Michael Phelps to Olympic gold in the 200m butterfly at London 2012, joking that he "still doesn't believe it", referring to his memorable reaction following the final.