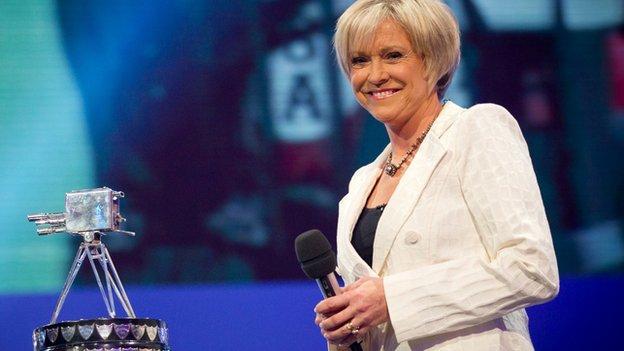 Sue Barker has stepped down as a presenter of BBC Sports Personality of the Year after 19 years in the role.

But the broadcaster will be on the judging panel for this year's awards - the 60th anniversary of an event that celebrates success for the UK's sportsmen and women.

The show will be broadcast live on BBC One and BBC One HD from the First Direct Arena in Leeds on Sunday, 15 December, when Gary Lineker, Clare Balding and Gabby Logan will share the presenting duties.

Barker will remain at the helm for a host of BBC Sport programmes, including Wimbledon, and will play a major role at the Winter Olympics.

"It has been an honour to present BBC Sports Personality of the Year for the last 19 years and I have loved every minute of it," she said.

"The BBC have asked me to stay but I had made the decision to downsize my commitments a while ago and I knew that the time would be right after what was always set to be a magical 2012.

"I will still be very much involved with the show, though, and I'm looking forward to the 60th anniversary celebrations. I also of course look forward to continuing my other presenting work on the BBC."

Barbara Slater, director of BBC Sport, said: "It is with a sad heart that we announce that Sue is no longer presenting, having been the mainstay of the BBC Sports Personality of the Year for almost two decades.

"This is Sue's decision and one that we all respect.

"However, she won't be absent from our screens on the night, bringing some special elements to the show as we look back on what has been another bumper year for UK sport.

"Sue will also remain very much a key part of our presenting team at BBC Sport, as we prepare for a busy 2014 sporting calendar."

The 2013 panel will comprise 12 members this year:

The panel will select the shortlist for BBC Sports Personality of the Year, with the winner again decided by public vote on the night of the show.

The panel also chooses the first, second and third place for Team of the Year, Overseas Personality of the Year and Coach of the Year awards.

Additional awards including Lifetime Achievement, the Helen Rollason award, Young Sports Personality of the Year and Unsung Hero will also be announced on the night.

Slater added: "As it's the 60th anniversary of Sports Personality of the Year, we'll be looking back at some of the UK's greatest sporting moments as well as celebrating all that has been achieved this year.

"The fact the show remains so popular after so many years is testament to the outstanding performances of our sportsmen and women."

He joined a list of sporting greats to have taken the award including Bobby Moore, Princess Anne, Lord Sebastian Coe, Daley Thompson, Dame Mary Peters and Sir Christopher Chataway, the first victor in 1954.