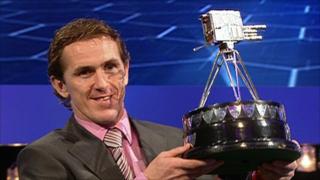 AP McCoy wins the 2010 BBC Sports Personality of the Year after he was victorious in the Grand National earlier that year.

It was the jockey's 15th attempt at the Grand National and he won the prize riding Don't Push It.

The 18-time champion, who is the only jump jockey to have ever ridden more than 3,000 winners, recently made it to 4,000 career winners landmark.