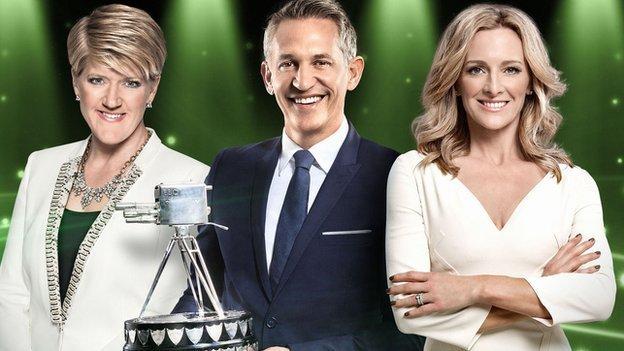 Tickets for BBC Sports Personality of the Year 2015 in Belfast sold out in 35 minutes - the quickest sell-out since the show went on the road in 2006.

Taking place in Northern Ireland for the first time, this year's event is live at The SSE Arena on 20 December.

Gary Lineker, Clare Balding and Gabby Logan will again present the show, which will be live on BBC One, the BBC Sport website and BBC Radio 5 live.

A limited number of extra tickets will be available closer to the event.

Carl Doran, the show's executive editor, said: "We are delighted that tickets for Sports Personality of the Year 2015 in Belfast have sold out so quickly.

"It's testament to the appeal of the show and for those who got tickets or choose to watch on BBC One, it's going to be a great evening of entertainment."

Logan added: "This has been a brilliant year for sport and we're all very much looking forward to celebrating it in Belfast.

"Sports Personality is always a great show and having had a sneak peek at this year's plans, it looks like the event is going to be one of the best yet."

How is the winner decided?

The Sports Personality of the Year award will be determined by a public vote on the night with the 10-strong list of contenders selected by the following panel:

Real Madrid footballer Cristiano Ronaldo was named Overseas Personality of the Year, and the England women's rugby union team took the Team of the Year prize.

This year's highpoints include both Northern Ireland and Wales reaching their first major football tournaments in decades, cyclist Chris Froome claiming his second yellow jersey in the Tour de France and England finishing third in the Women's World Cup.

Sports Personality Roll of Honour: Every winner from 1954-2014