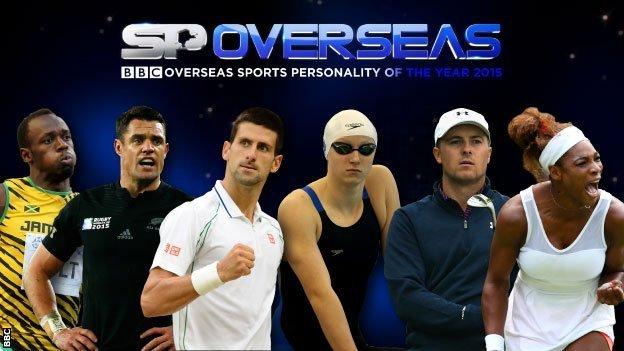 Voting has now closed for the BBC's Overseas Sports Personality of the Year 2015.

The award recognises the overseas athlete who has made the most substantial contribution to sport this year and, for the first time in its history, is decided by a public vote.

And if you missed out on this vote, you can still register for a BBC iD now which will let you cast your vote for the main Sports Personality of the Year award on Sunday, 20 December.

The Overseas winner will be announced ahead of the main awards show in Belfast.

How to get a BBC iD sign-in

BBC Sports Personality of the Year terms and conditions

So who are the contenders for the BBC's Overseas Sports Personality of the Year 2015? In alphabetical order, they are:

Achievements in 2015: Usain Bolt enjoyed another stellar year in the big competitions, winning three gold medals at the World Championships in Beijing to ensure he successfully defended the trio of titles he won in Moscow in 2013.

He beat doping offender and clear favourite Justin Gatlin in both the 100m and 200m - ending the American's 28-race unbeaten run in the former in a time of 9.79 seconds.

Did you know? Bolt has won the Overseas award three times - a record he holds with tennis star Roger Federer and boxing legend Muhammad Ali.

What they said: "Usain Bolt was challenged in Beijing more than he has been at any time during his career. Put on top of that the burden of 'saving the sport' which was placed on his shoulders, it means that the pressure was there. I have to give him so much credit for his performance." Eight-time world champion Michael Johnson.

Achievements in 2015: The All Blacks became the first side to win consecutive Rugby World Cups when they beat Australia in a thrilling final at Twickenham in October.

Carter scored 19 points in the final and was named man of the match, completing a superb individual tournament in which he kicked 23 conversions, 10 penalties and two drop-goals.

Did you know? Carter is rugby's all-time leading points scorer, with 1,598 from his 112 Tests.

What they said: "Dan Carter will be number one in the pantheon. Clearly number one." Australia's World Cup-winning outside-half Stephen Larkham, when asked who is the greatest ever fly-half.

Achievements in 2015: It has been the most successful year to date for the world number one in tennis, with victories at the Australian Open, Wimbledon and the US Open. He also reached the final of the French Open.

In total, he has won 11 titles in 2015 - a career best - and his record of winning three Grand Slams and reaching the final in the other has not been matched since Roger Federer managed it in 2006 and 2007.

Did you know? Djokovic was spotted as a six-year-old by former Yugoslav tennis player Jelena Gencic at Mount Kopaonik, where Djokovic's parents ran a fast-food restaurant.

What they said: "As a single season, I think Djokovic's is the best since Rod Laver in 1969." Former French Open men's doubles winner Patrick McEnroe compares Djokovic's achievements with those of Laver, who won the calendar-year Grand Slam in 1969.

Achievements in 2015: Ledecky has had an incredible year, the highlight being five gold medals and two world records at the 2015 World Championships in Kazan, Russia.

What they said: "Every time Katie gets in the water [it's like] 'hey, we'll just give the world record a shot tonight'. Why not? It doesn't even look like she's breathing hard. It's just unbelievable." American swimmer Michael Phelps, who is the most decorated Olympian of all time.

Achievements in 2015: In the space of just 71 days, Spieth went from a promising young golfer to one who had written himself into history by winning both the Masters and the US Open - a feat achieved by only five other golfers.

He was tied for fourth at The Open and runner-up to Jason Day at the USPGA, but ended the year by winning the £7.5m Tour Championship in Atlanta.

Did you know? Spieth became the youngest winner of the US Open since Bobby Jones in 1923.

What they said: "He's a grizzled veteran at 21 years old. Jordan is so beyond his years. I like everything about the young man. He's polite. He's humble. He handles himself so well, on and off the golf course. And he's obviously a wonderful player." Jack Nicklaus, who holds the record for the most major victories (18).

Achievements in 2015: Serena Williams is now her country's most decorated female tennis player after winning the Australian Open, French Open and Wimbledon during 2015 - she reached the semi-final in the other Grand Slam, the US Open.

Did you know? Serena Williams has been ranked as the world number one for 268 weeks - only Graf (377) and Martina Navratilova (332) have spent longer at the top of the rankings.

What they said: "Serena is the greatest to ever play the game when she is on [form]. Martina Navratilova would try to do something that people don't do, which would be to attack her. I would say she wouldn't have a lot of success. If they played 10 times, maybe she could win a couple. I think it would be tough to win a majority for sure." Tennis legend John McEnroe discusses who would win if Serena Williams and Martina Navratilova played each other at their peaks.

Who put together this shortlist?

This year, the panel consisted of: