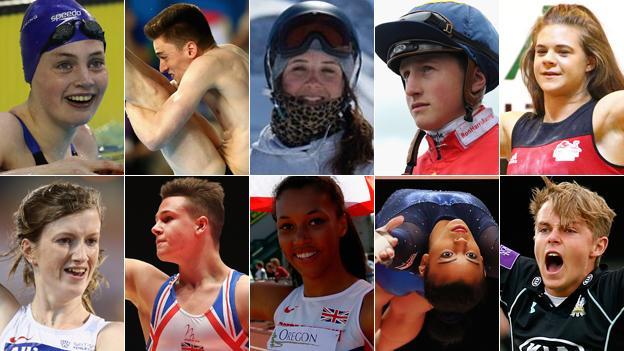 Make a note of these 10 names. They all have the potential to be on medal podiums for years to come.

Their achievements in 2015 have earned them a place on the shortlist for the BBC Young Sports Personality of the Year.

One of these teenagers will follow in the footsteps of past winners, Claudia Fragapane, Ellie Simmonds, Wayne Rooney, Amber Hill, Tom Daley and Andy Murray.

The overall winner will then be announced live on Sunday, 20 December, when Belfast hosts Sports Personality of the Year 2015.

Brinn was just three years old when he took up gymnastics, and only two years later joined the development squad at South Essex Gym Club in Basildon, Essex. Despite breaking his leg in a training incident recently, he is aiming for a place at Rio 2016 to fulfil his dream of winning an Olympic medal in honour of his father, who passed away when he was younger.

Sam and brother Tom, who is also a professional cricketer, are the sons of former Zimbabwe international Kevin Curran, who played at the 1983 World Cup. Sam has combined his cricket development with continuing his academic studies and is studying three A Levels (PE, Art and Business Studies).

Ellie is the younger sister of Team GB Olympian Becky Downie. Ellie's commitment to her education led her to achieve 5 GCSEs at A-C, while competing internationally winning multiple medals in various competitions. In doing so, she secured a place at her first-choice sixth-form college. Alongside sister Becky, Ellie also regularly hosts training sessions at her gymnastics club where children get the chance to train with her.

Sophie, who has cerebral palsy, was inspired to take up athletics after watching London 2012. She won her first world title within a year. Aside from excelling as an athlete, Sophie has proved she possesses great sportsmanship, congratulating every athlete after her races, and taking all advice on board, whether it be about sporting improvements or how to deal with the media.

Five years ago, Tully was merely a spectator watching her mum, Amanda, swimming for fun. Tully has a progressive neurological condition that causes muscle weakness, and was reclassified earlier this year. Tully's first appearance on the international stage was in 2013, where she won one gold, three silver and three bronze medals in her age group at the 25th German Open Meet in Berlin.

Alongside her impressive sporting resume, Morgan has taken her A-levels this year, achieving an A in PE. She has also attended numerous radio and school interviews to promote the importance of her education despite her intense training schedule.

Matthew is currently training with the senior GB team, with his sights set on Rio 2016. He has an almost unblemished attendance record at school and college, barring his sport commitments. At present he is studying BTEC Sport Level 3 at college.

Tom first attended the British Racing School in 2012 for Pony Racing tuition. Tom quickly advanced through the Pony Racing Training and in his final season attended a week-long course for the 10 most promising pony racing jockeys in the UK. Richard Hannon Jr, a previous Champion Trainer of Racehorses and Tom's boss has said: "There's no doubt that Tom has the ability to go all the way. He rides very well and is a pleasant lad who works hard and deserves all the success he has had these past 12 months."

Molly, who is the younger sister of British skier Katie Summerhayes (seventh place at 2014 Sochi Olympics), started skiing aged four at a local club, and has been competing in UK-based competitions for eight years. She made her international debut this year.

Rebekah began weightlifting aged 12 after switching from sprinting when her coach noticed her talent. Rebekah would like to pursue weightlifting as a career. She trains in the gym for two hours every day but remains committed to her school work.

Full terms and conditions on BBC Young Sports Personality 2015 and other awards.