"She is a great credit to her herself and her family" - England and Manchester City captain Steph Houghton on footballer Lucy Bronze.

Bronze, 24, is the latest contender to be profiled in the run-up to the BBC Sports Personality of the Year award on 20 December, as we focus on one of the 12 shortlisted nominees each weekday before the show.

What They Say - Steph Houghton

"Our England manager Mark Sampson said Lucy can become the best right-back in the world and her chances are very realistic. She is very driven, and wants to be the best. She is very competitive no matter whether it's a 10m race, or a game of cards.

"She is young and hasn't had that much tournament experience, so to come into a World Cup and perform how she did and score two very important goals for us... I think you always want her on your team.

"Her goal against Norway was unbelievable. I've not seen her score many 'worldies', but every player has their moment, and that was definitely Lucy's. It was a historic moment for us as a team, we wanted to reach the World Cup quarter-finals, and that goal proved to be the winner.

"Off the field, she is always right about everything, in the know and full of facts. But in all seriousness she is a lovely girl. She is great credit to herself and her family. I'm privileged to play alongside her."

Nienke van der Tak: "Lucy should win. She, with the Lionesses, made a big step forward to change the view of women playing. Absolute role model."

Carol Gibson: "Bronze should win, she has been a catalyst for women's football, changing perception and an inspiration to a nation."

Kirbi Jackson: "That goal inspired me to take up football again after four years out - now I'm with a fantastic team and we're sitting at the top of the table, so far unbeaten in the league. I couldn't be happier, cheers Lucy." 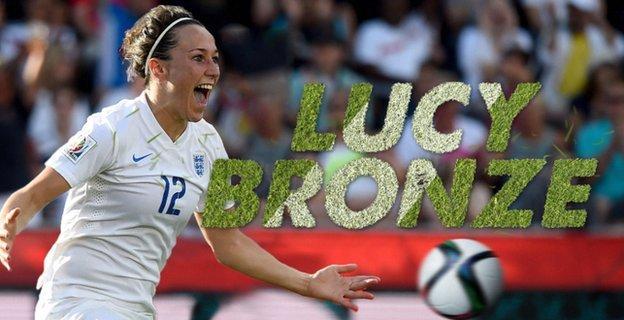 Whatever your age, ability or fitness level, there is a type of football suitable for you.

Visit the Get Inspired website to find out more on how to get into football.