He beat Novak Djokovic, Katie Ledecky, Usain Bolt, Jordan Spieth and Serena Williams after the award was decided by a public vote for the first time.

Carter, 33, was an integral part of the New Zealand team that beat Australia 34-17 to win the World Cup in October.

The highest ever points scorer in Test rugby, he won the World Player of the Year award for a third time in 2015.

"I'm thrilled to have been voted BBC Overseas Sports Personality of the Year by the UK public," said Carter.

"It's been an incredible year for me on British soil and the support has been phenomenal.

"It was an incredibly competitive shortlist and I'm honoured to have been recognised alongside these great sportsmen and women from around the world."

Fly-half Carter, who joined French side Racing 92 after the World Cup, missed the All Blacks' win in the 2011 final through injury but fought back to regain the number 10 shirt for the 2015 edition.

He went into the tournament, which took place in England in September and October, acknowledged as one of the greats of the game but with some doubts over his form and whether his body could still withstand the rigours of international rugby.

However, the longer the World Cup went on the better he played and, after landing a vital drop-goal in the edgy win over South Africa in the last four, a sublime performance in the final against the Wallabies saw him win the man of the match award. 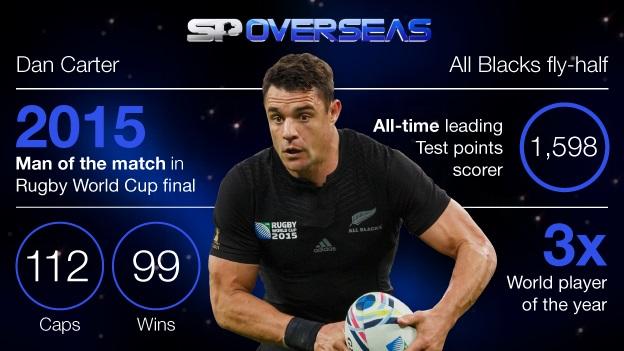 In total he kicked 19 points, made 11 tackles and was an unruffled decision-making presence as New Zealand became the first team to defend the World Cup.

Carter, who retired from international rugby after the World Cup final, won 112 caps for the All Blacks in a Test career that started with victory over Wales in 2003.

He was born and raised in the town of Leeston, 30 miles south west of Christchurch in New Zealand's South Island.

The fly-half made his debut for the Christchurch-based Crusaders Super Rugby team in 2003 and, bar a brief injury-hit spell with Catalan side Perpignan, remained with them until his move to Parisians Racing 92, for whom he made his debut in the recent 33-3 European Champions Cup win over Northampton.