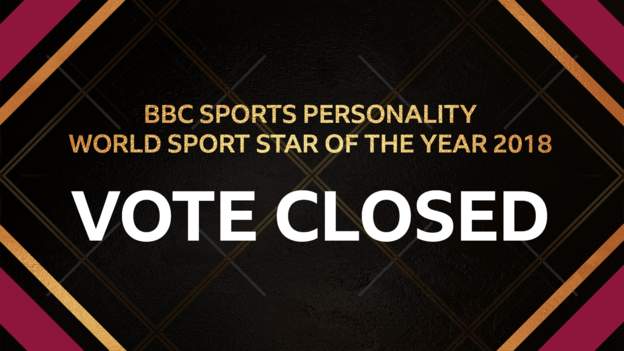 Voting to decide the winner of the BBC's World Sport Star of the Year award has now closed.

However, you can still learn more about the four contenders below.

Four-time Olympic champion Simone Biles returned from a two-year break in 2018 - but you wouldn't have known it.

The all-conquering American took her tally of World Championship gold medals to a record 14 in Doha. Her performance in the Middle East was made all the more remarkable given that she was in hospital with a kidney stone less than 24 hours before the competition began.

She became the first gymnast in three decades to win a medal in all six women's events at the same championships. Four of those medals were gold, including a record fourth world title in the all-around and the team title. She also won silver in the uneven bars and a bronze in the balance beam.

What they said: "She's just in another league almost. I'm honestly just in awe of her" - American gymnast Riley McCusker on Biles.

Ledecka became the first woman to win a gold medal in two different sports at the Winter Olympics with her double triumph in Pyeongchang.

A snowboarder by trade, she made history in South Korea just by competing in both skiing and snowboarding at an Olympics.

But she refused to stop there, claiming a super-G victory so unexpected that American TV network NBC had already declared Austria's Anna Veith the winner.

Ledecka's success in snowboarding's parallel giant slalom race was less of a surprise - she was the reigning world champion - but no less memorable.

What they said: "I firmly believe she's one of the greatest living athletes" - her snowboarding coach, Justin Reiter.

Molinari won his first major and was instrumental in Europe's Ryder Cup glory. After soaring up the world rankings thanks to winning the PGA Championship at Wentworth - the European Tour's flagship event - and his maiden PGA Tour victory at the Quicken Loans Classic, he went on to claim The Open at Carnoustie.

He mastered the tricky conditions and held off a leaderboard containing Tiger Woods and Rory McIlory to become the first Italian major winner. As part of Europe's Ryder Cup team, he led the charge as they belied their underdog status to thrash the United States.

The Italian became the first European in the history of the tournament to win all five of his matches. His partnership with Tommy Fleetwood will go down in Ryder Cup folklore. To cap off the best year of his career, he was the first Italian to become the European Tour's top player as he won the Race to Dubai.

What they said: "The guy is the hottest player on the planet currently" - 2013 US Open champion Justin Rose.

Enjoyed a brilliant year in which he became the undisputed world cruiserweight champion.

Already the WBO champion, he started 2018 with a bang by taking the WBC belt off Latvia's Mairis Briedis. In July he travelled to Russia to face home favourite Murat Gassiev in Moscow but silenced a hostile crowd with a victory that gave him the WBA, IBF and The Ring Magazine belts.

He was crowned the undisputed cruiserweight champion of the world in just his 15th fight as a professional. Next in his sights was Britain's Tony Bellew in a bout where all four world titles were on the line for only the sixth occasion in men's boxing history.

The London 2012 gold medallist floored his opponent with a stunning combination to retain his belts and reaffirm his status as one of the best boxers on the planet.

What they said: "You are the greatest fighter I have ever shared a ring with, you are a great champion, you beat me fair and square" - Bellew on Usyk.