Legendary tennis player Billie Jean King has been honoured with the lifetime achievement award at the BBC's Sports Personality of the Year show.

The 75-year-old American, one of the greatest female tennis players of all time, won 39 Grand Slam titles in singles and doubles competitions.

King is an advocate for gender equality and in 1973 won the Battle of the Sexes match against Bobby Riggs.

She is also the founder of the Women's Tennis Association (WTA).

"We all stand on the shoulders of those who came before us and we all have an opportunity to share our lives, our experiences and our vision for the future," King said.

"Each of us is an influencer, and to all the athletes who truly have a platform, let's continue to use the power of our voices and our actions to inspire others."

Speaking from Miami, three-time Sports Personality of the Year Andy Murray said she "was one of the best of all time on the court", but that her achievements away from the court were even more impressive.

"She has been a huge advocate for women's rights and equal rights and I think that has translated into tennis, unlike many other sports," he said.

"We have pretty equal prize money across the men's and women's tours, and that is extremely significant. She was advocating for that probably 30-40 years ahead of her time and that is one of the most impressive things she's done.

"She is someone who stood up for what she believed. I imagine at the time she went through a lot, but ultimately she has changed our sport for the better by doing that. More athletes should take her lead."

King turned professional in 1959 and gained global recognition two years later when she and Karen Hantze Susman became the youngest pair to win the women's doubles title at Wimbledon.

She retained her Wimbledon titles in both 1967 and 1968 - the years in which she also won her first US Open and Australian Open singles titles respectively.

In total, King won a record 20 Wimbledon titles as well as 13 US Open, four French Open and two Australian Open crowns between 1961 and 1979. She collected three Grand Slam titles in one year in 1972.

She won 129 singles titles in all, 78 of which were WTA titles. In addition, she won seven Fed Cups as a player and four as the US team's captain.

King retired from professional tennis in 1983. 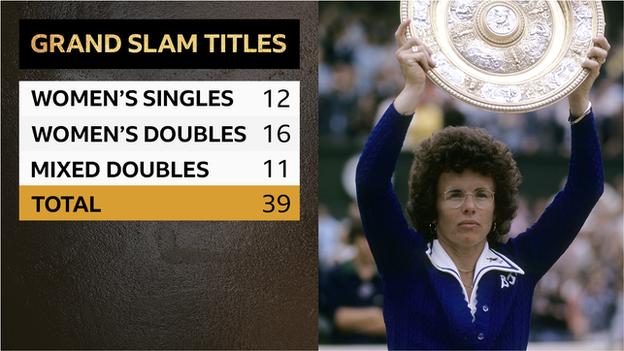 Fight for equality and social justice

Off the court, King was a pioneer in campaigning for equal prize money in tennis, and in 1971 became the first female player to earn more than $100,000 in prize money.

However, when she won the US Open in 1972, she received $15,000 less than the men's champion and vowed not to return the following year unless the prize money was equal.

In 1973, the US Open became the first major tournament to offer equal prize money for men and women.

Her campaigning didn't end there, though, and throughout the 1970s - the height of her competitive years - she led player efforts to support the formation of the first professional women's tour and became the first president of the WTA.

In 1974, along with then-husband Larry King, she started the Women's Sports Foundation, which works to ensure all girls have access to sport.

Battle of the Sexes

Perhaps the most high-profile moment in King's fight for equality within tennis was her 1973 exhibition match against former men's number one Riggs.

Riggs, who won three Grand Slam singles titles in the 1930s and 1940s, was a self-proclaimed chauvinist and had claimed the women's game was inferior to the men's.

After challenging and defeating 24-time Grand Slam singles champion Margaret Court, Riggs challenged King to play him for a prize of $100,000.

Dubbed the Battle of the Sexes, the King-Riggs match took place in Texas in front of an estimated worldwide television audience of 90 million - making it the most-watched tennis match of all time.

King beat Riggs 6-4 6-3 6-3 and the match was considered a significant event in garnering greater respect for women's tennis.

The Battle of the Sexes was the subject of the 2017 film of the same name, in which King was played by Oscar winner Emma Stone.

I would like to thank everyone at the BBC for this lifetime achievement award and for including me in this historic evening.

This part of the world has played a major role in my life and my career. I won my first national championship at the Irish Open in 1963 and I won my final professional WTA Tour title right here in Birmingham in 1983.

Next year, I'll be going to Wimbledon again. It will be my 59th consecutive year of going. It's like a second home for me.

I first played tennis at 11, and the second time I picked up a racquet I knew I wanted to be the number one player in the world and to win Wimbledon.

At 12, I asked myself, where is everybody else? From that moment on, I committed myself to fight for equality and inclusion for all for the rest of my life.

At 13, I had the privilege of seeing the great Althea Gibson play. She was the first black player to ever win a major title - the French in 1956 - and for the first time I saw what being the number one player in the world looked like. That's how good you have to be.

We all stand on the shoulders of those who came before us and we all have an opportunity to share our lives, our experiences and our vision for the future.

Each of us is an influencer, and to all the athletes who truly have a platform, let's continue to use the power of our voices and our actions to inspire others.

Thank you so much for tonight.