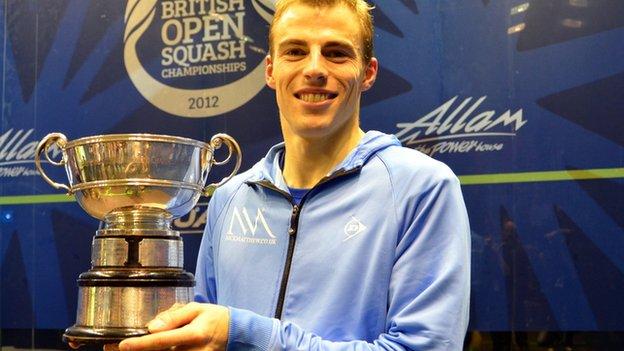 In the women's event, Malaysian world number one Nicol David won her fourth title with an 11-6 11-6 11-6 victory over Nour El Sherbini.

At 16, Egyptian Sherbini was the youngest ever British Open finalist.

Ashour led 8-6 in the first game before surrendering the lead as Matthew came back to dominate proceedings, forcing his opponent to hit the tin 14 times.

Only a late fightback from 24-year-old Ashour in the third, when he restored parity after being 6-2 down, threatened to derail Matthew's title-winning chances

"Ramy is a genius and a magician with the racket but he made a lot of errors today," said Sheffield-born Matthew.

"There is a fine margin with those shots and had they been a few millimetres higher they would have been winners."

Despite the youngster starting each game confidently, she was unable to match the power and speed of her more experienced opponent.

"Nour is certainly one to watch for the future but right now I am so happy to win this title again," said 28-year-old David.

"A lot of young Egyptians are coming through and that's good for the game. I had better get back home and start training harder."