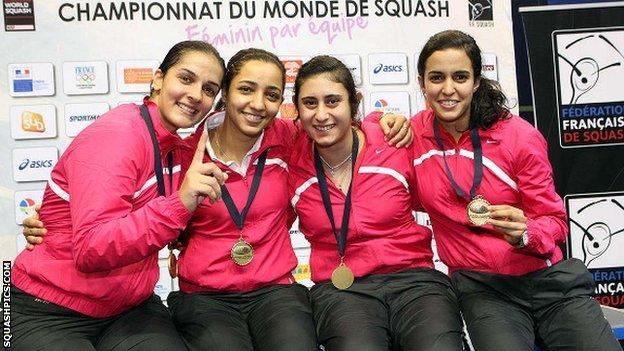 Alison Waters got the top seeds off to a winning start in the final but Raneem El Weleily levelled before Omneya Abdel Kawy won a dramatic decider.

"We always thought it would be close - and hopefully we will learn a little from it," said coach Chris Robertson.

England were going for their seventh title in a 10th successive final, but their winless run since 2006 will continue after a narrow defeat.

"It's so good for Egypt and so good for squash - it was a super final with three matches of unbelievable squash," said Egypt coach Amir Wagih, after his side won the title for the second time.

"Omneya is back on form - she gave a really classy performance.

"My players have now won all the world titles except one, and that is the women's World Open title, so I am hoping that I can complete the set at the end of the year in the Cayman Islands."