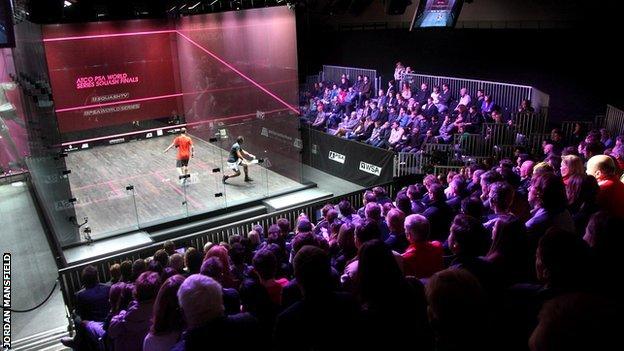 Squash is hoping to make it third time lucky as it bids for a place at the 2020 Olympic Games.

The sport is showcasing itself to the International Olympic Committee (IOC) at the Hong Kong Open, which starts on Wednesday, after failing to make it to London 2012 and Rio 2016.

With glow-in-the-dark courts, a global audience, some of the world's fittest athletes competing and a more television-friendly approach, there is real hope Olympic admission can finally be achieved.

"This is a lot more of a winnable race than it has been before," Alex Gough, chief executive of the Professional Squash Association, told BBC Sport.

"When you look at the list of criteria that all the sports in the race have to meet, I think we are now in a position where we pretty much tick all of those boxes."

Seven sports - squash, climbing, karate, roller sports, baseball/softball, wakeboard and wushu - are competing for a place at the Games in eight years' time.

In 2009's race to Rio, squash lost out to bids from rugby sevens and golf - a decision Gough at the time told BBC Sport was "massively disappointing".

Hong Kong represents a watershed moment for the sport, as it seeks to demonstrate its evolution from a racquet game on the fringes of television schedules into a 21st century multimedia competition.

Under-court lighting, music, referee video reviews, HawkEye and in-play statistics have all been added, after squash listened to and learned from the IOC's feedback in 2009.

"We have had a lot of messages from the IOC about making the sport more commercial, improving it for television and so on," Gough revealed.

"A key thing is that presentation. Look at the ATP Finals at the O2 - that is a classic example, with all that lighting and making it a really excellent spectator experience for the paying public. Those are the sorts of lessons we are trying to pick up all the time, as a sport that's trying to be innovative and learn from bigger sports.

"We have really improved the sport for TV over the last two or three years. It has been a big push forward, and we are trying to improve it week after week."

The design of top squash courts has also changed dramatically, with the viewing experience improved by removing an outer skeleton of struts and making the entrance/exit less visible.

Modern, lightweight arenas can be erected in most locations, and tournaments have taken place in the shadow of the pyramids or inside the iconic, cavernous settings of Grand Central Station in New York and Canary Wharf in London.

But Gough argues that, fundamentally, the basics of squash should make it an attractive proposition for the IOC.

"At the core of squash is that the athletes are among the fittest on the planet. They can play two-hour matches with pulse rates of 180 beats per minute for the whole time.

"Squash hasn't been great at showcasing its athletes, until now. We have always had the players but they haven't been placed in the professional-looking events that they deserve. The sport has caught up."

Following Hong Kong, where courts will be situated on the coast of Lantau Island overlooking the bay and the mainland, squash will next make a submission and presentation to the IOC programme commission on 19 December.

The entire selection process will run until September 2013, when the accepted sport will be announced.