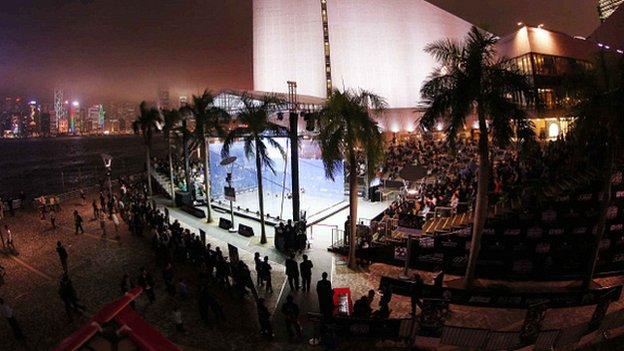 Britain's world number one James Willstrop was unable to retain his Hong Kong Open title after he lost to fifth seed Ramy Ashour in an absorbing final.

The event was squash's showcase to the International Olympic Committee after omission from London 2012 and Rio 2016.

"I could not be more happy with this weekend," said World Squash Federation President N Ramachandran.

"We hope that the inspectors were happy with the staging, presentation and broadcast of our sport, together with our fine Tour athletes, and that their positive impressions can be reinforced when we present to the Commission as a whole in Lausanne later this month."

Squash is currently among seven sports - including climbing, karate, roller sports, baseball/softball, wakeboard and wushu - which are competing for a place at the Games in eight years' time.

Squash will next make a submission and presentation to the IOC programme commission on 19 December, with the entire selection process set to run until September 2013, when the accepted sport will be announced.

Walter Sieber, one of the two IOC delegates in attendance, said: "We were able to make a very thorough inspection of the way the event was organised, taking into account the needs of the athletes and coaches. Naturally, we also wanted to assess how the glass court is helping to present the sport for broadcast purposes.

"We found that the competition arrangements were of a high level, and on court we were able to see the top players in action too. It has proven to be very informative."

In the men's final, Ashour was in inspired form as he won the sixth Professional Squash Association World Series event of the year. "I was not good enough," said Willstrop, 29. "It's all a question of fine lines, Ramy was just too good."

"I am so glad that the IOC inspectors could come to see such an amazing set-up that is done here every year," said David. "For us players to play on the waterfront is wonderful - and they get to experience it too.

"I really hope that it helps our chances to join the Olympic programme."