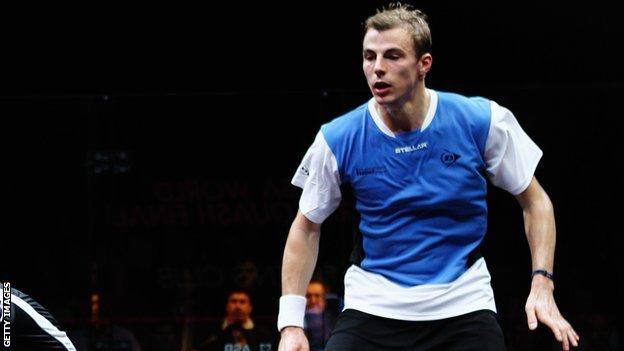 England's defending champion and world number two Nick Matthew beat Swiss Nicolas Mueller in round one of the Squash World Championships in Doha.

Matthew is aiming to become the first man to win the world title three times in a row since Pakistan's Jansher Khan, who was unbeaten from 1992 to 1996.

"I felt a bit more nervous than usual as it was one of the toughest opening matches you could get," he said.

"It's also an unusual court - things can go well one minute and quickly change."

Gaultier, who damaged his right ankle in Hong Kong last week, beat Egypt's Mohammed Abbas 11-5 11-5 11-1 and said: "I feel relieved to be able to play.

"I would have been really disappointed to have pulled out of such a big tournament."

Ashour beat compatriot and world junior champion Marwan Shorbagy 11-7 12-10 11-8 but denied that his recent superb form has made him the tournament favourite.

"They want me to think that I'm favourite, so that they can win," said the 25-year-old. "What they really think is 'he's a good player, but I will be world champion myself'."