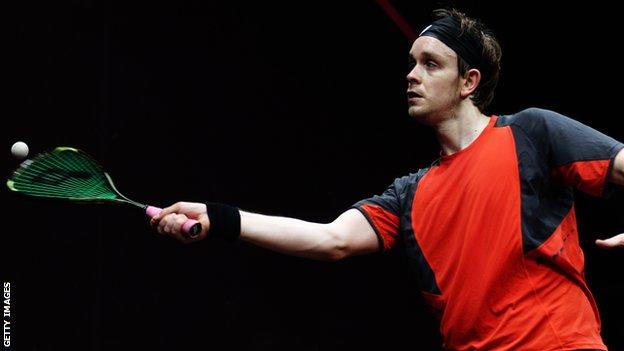 England's James Willstrop and Nick Matthew each progressed to the quarter-finals of the World Championships with straight games victories on Tuesday.

He will play Amr Shabana, the four-time former world champion from Egypt, in the last eight in Doha.

We were both hitting an attacking length, and it was focused and punishing. I feel very good

Matthew fought back from 0-6 down in the second game against Momen, and then won critical video review penalty point decisions when he was 8-6 and 9-7 up in the third.

Earlier Leeds-based Willstrop had shown he was adapting to the demands of an unusually testing cool court by producing a consistently immaculate length, subtle disguises and variations of pace against Ghosal, a regular sparring partner at their shared Yorkshire base.

Apart from a brief spell in the middle of the second game, when Ghosal sneaked into a 6-5 lead, Willstrop controlled the match.

"When you go on court each day with each other and spend a lot of your lives together, it's slightly difficult, but a lot of players have to get used to that - it's part of the togetherness the tour brings," the 29-year-old said afterwards.

"I felt I played really well. There was a lot of stuff going through to the back, but we were both hitting an attacking length, and it was focused and punishing. I feel very good."