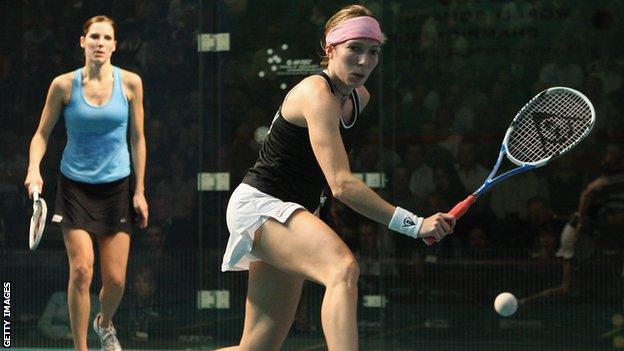 Madeline Perry produced a brave display before losing in four games against six-times champion Nicol David at the World Open in the Cayman Islands.

"I know that Madeline can come back from two-love down and I had to do something about it," said David.

"I had to adjust my shots in the fourth and I'm pleased with that."

Northern Ireland woman Perry, 35, engineered a brief but passionate recovery during which she once hurled her racket away in frustration, a misdemeanour bringing mild admonishment from the referee.

Perry beat world number one David back in 2009 en route to the final of the British Open in Manchester.

Malaysian David's win sets up a semi-final meeting with Jenny Duncalf which is a repeat of last year's final.

The other semi-final will be between David's two closest rivals, Laura Massaro of England who beat her twice last year, and Raneem El Weleily of Egypt.