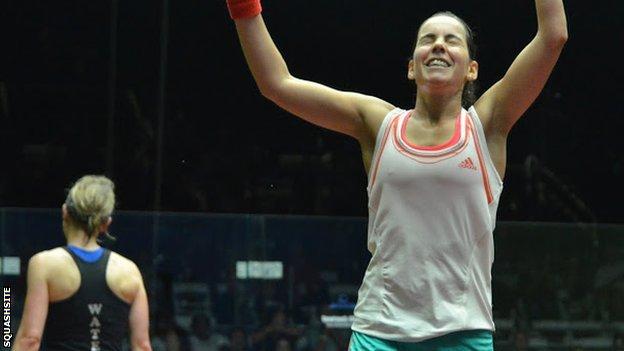 England's Jenny Duncalf fought back from two games down to beat compatriot Alison Waters in the quarter-finals of the squash World Open in Grand Cayman.

"I've become better at dealing with the pressure of being expected to win over the last couple of years and that's helped me improve my consistency and my ranking," said Massaro.

"I'm so pleased to make a first World Open semi-final. I'll just take each match as it comes now."

Duncalf, 30, faces a daunting task against six-time champion David in a repeat of last year's final, following her 77-minute battle with Waters.

"It was a bit scrappy at the start but in the second I was starting to feel much better and, even though I lost it, I felt the momentum had turned towards me," said Harrogate-based Duncalf.

"I'm delighted to win - a bit disappointed for Al too, but not that much! We all love playing here, the whole vibe is great and it makes you feel so relaxed on court - and it wasn't too hot tonight which was a bonus!"