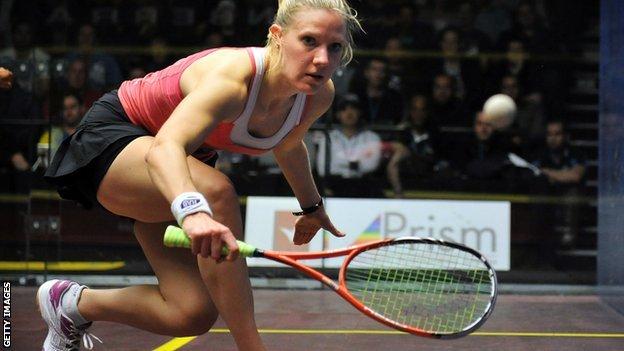 The Malaysian is chasing a seventh World Open title in eight years and fifth in a row.

Duncalf, who suffered a 0-11 loss in the third game of last year's final, started well but David took three points in a row to close out the first game before dominating the next two to win in just 37 minutes.

"Jenny was playing some great shots at the start, I just couldn't tell where the ball was going next and I wasn't able to play my own game," Nicol told SquashSite.

"Laura and I both know we have to step up our games for [the final], so it should be a great battle."

Preston-based Massaro, 29, opened a four-point lead in the opening game but El Weleily stepped up her play to take it.

Masssaro levelled and saved four game-balls to force a tie-break in the third but she twice hit the tin to hand her opponent a 2-1 lead.

The fourth game was easily won by the Englishwoman, who took the decider after her 23-year-old opponent made two errors.

"We've been taking turns at winning and swapping in the rankings all year, so it's fitting that there was just a couple of points between us in the whole match," said Massaro.