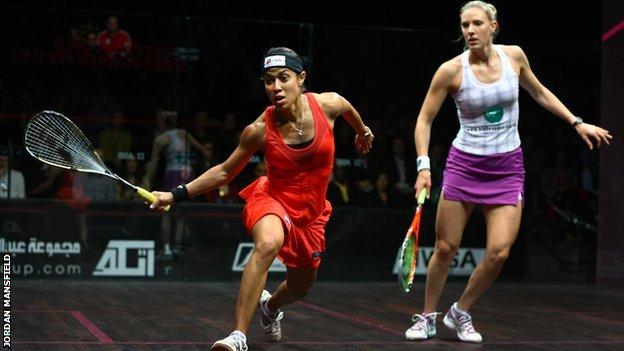 England's Nick Matthew and Laura Massaro were both beaten as Amr Shabana and Nicol David retained their titles at the World Series Squash Finals.

"This is an amazing feeling. I love this tournament," said Shabana.

"I have been here for more than 10 years and they've perfected it."

"I tried to get my game in gear but he just wouldn't let me. In the end it was a steam train."

Massaro led 8-6 in third, but the 29-year-old Malaysian raised her game to seal an emphatic victory and a second successive win in a final against Massaro.

"Knowing she was in front of her home fans I knew I had to start strongly and not let her feed off the crowd."

Massaro was disappointed but said she would leave Queen's Club in a positive frame of mind.

"I'd say this week has been 80% positive and the key is to take the good from that and learn from the 20% that wasn't so good," she said.