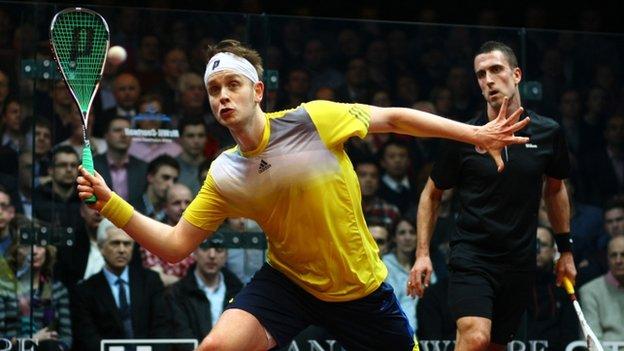 The Essex left-hander had produced one of the wins of his career to reach the final, beating world number two Nick Matthew in a brutal match on Thursday.

"For him to come out 24 hours later and produce it again was so tough," Willstrop said after his 57-minute win.

Barker, playing in front of a home crowd in London's Docklands, raced to a 4-1 lead in the first game. But Willstrop pulled things back to 5-5 with some accurate squash.

The pair then traded points before Willstrop pulled away in style, taking the game with a sublime backhand drop-shot.

Going into the match, Barker had won just one of their 19 PSA Tour encounters, his sole success coming in the semi-final of the same tournament in 2011 where he won 3-1.

And when Willstrop took an early lead in the second game, it seemed as if the match might be going to script.

But Barker fought back strongly, twisting and turning the tall Yorkshireman around the court and forcing a number of errors from the Willstrop racquet to level the scores.

The break between games seemed to rejuvenate Willstrop, who took control from the start of the third, winning the game in 10 minutes against an increasingly frustrated Barker.

As the 29-year-old Brentwood native tired, Willstrop dominated the play from the middle of the court, clinching the title for a fourth time with a straight drive off a defensive drop shot from Barker.

"Winning titles at this level is incredibly tough, and getting harder all the time," Willstrop said. "The effort that is required to perform and win is immense.

In the semi-final Barker recorded only his second career win against pre-tournament favourite and world number two Nick Matthew, but refused to blame the effects of that tough match for his defeat.

"It was a good win for me last night. I was trying to back it up but I couldn't quite make it," said Barker.

"It has been an improvement for me this week so I am happy. It is a big disappointment to lose today, but well played to James."