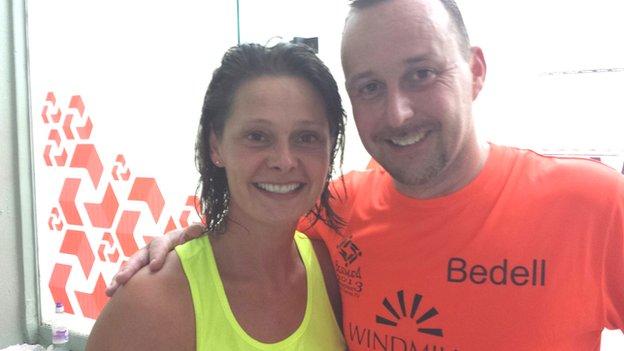 Jersey's Nick Taylor retained his squash singles title at the Island Games on the same night his wife also clinched gold in Bermuda.

"It was tough, even though the score was 3-0," Sarah told BBC Radio Jersey.

"You don't realise how hot it is on the court.

"For me, getting gold was absolutely brilliant. There's other people from Team Jersey come to watch and it's great knowing that they're all behind you."

For husband Nick, a former world number 14, defending the title he won in the Isle of Wight in 2011 is just the start of his quest for medals.

He will also compete in the men's and mixed doubles later in the week.

"I feel fantastic. Any medal's a good one but you want to come and win gold so I'm delighted," he said.

"I'm obviously disappointed for Mike but I'm sure he'll be delighted after he sits down and just chills for a bit - he's got a silver medal which is better than he did in the Isle of Wight."