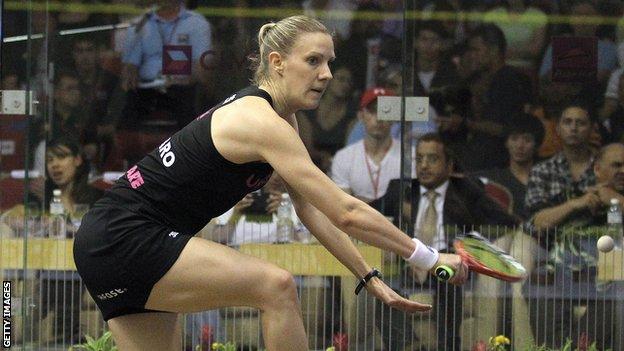 In May Laura Massaro became the first British woman to win the British Open Squash Championships since Lisa Opie in 1991.

She is currently the second-best female squash player in the world - the only woman ranked above her is the most successful of all time, Malaysian Nicol David.

The 29-year-old from Preston will be representing England in her first Commonwealth Games next year in Glasgow and leads a glut of successful English squash players in the world's top 10, including Londoner Alison Waters at number four and Jenny Duncalf at seven.

Taking away top prize at the British Open Squash Championships was the biggest win of her career. The final, held on a boiling hot Sunday in the north of England, saw her unseat title-holder and world number one David.

Squash crowds are always family affairs, and most of the stadium had a personal investment in the win. When David put her last shot in the tin it wasn't only Massaro breaking down in triumphant tears.

A British victory for a woman at her home event, often called the 'Wimbledon of Squash', means she must have been mobbed by the media? To Massaro's amusement, not so.

"It unfortunately coincided with a really successful weekend in sport," she told BBC Sport. "And I think the British & Irish Lions were playing."

The Games are vital to sports fighting for coverage in a world which is dominated by football, but squash is not in the Olympics. Massaro describes a conversation she's very used to having to BBC Sport.

"The amount of times you get asked 'oh, so are you going to the Olympics?' - especially in the build-up to London 2012," she says.

Since failing in 2009 to gain a place at Rio 2016, squash has undergone a revolution, including:

"And you have to say no. 'Well why not? I thought you were the world number two?' And you're like 'well I am, but it's actually the sport that's not there - not me'."

But that may be about to change.

This Sunday the International Olympic Committee will announce the sport securing the final spot at the 2020 games.

The IOC must choose between squash, wrestling, or baseball/softball. And, while baseball is still recovering following a recent doping scandal involving several of the world's top players, squash has always been 100% compliant with the World Anti-Doping Agency.

"It's really tough obviously," Massaro said. "I think this is the best bid that our World Squash Federation have ever put together. They've done absolute wonders for the sport."

And they've had a fair amount of experience in the preparation, with this being squash's third Olympic bid. The sport has never looked more ready to ignite the global audience it deserves.

You just have to take a look at the British Open in May to get an idea of why.

Massaro's victory was staged at the KC Stadium, home of recently promoted Premier League football side Hull City. With the packed crowd in cricket hats and sun cream, you could have been at the Ashes or Wimbledon.

Even better - the whole tournament was streamed live.

Squash's governing bodies have taken greater control over the sport's coverage with the launch in 2010 of Squash TV. This has led to live streaming of even more minor tournaments and improved uniformity in lighting and broadcasting standards.

And we certainly have form in England at squash, given six of the top 10 players in the world - both women and men - are English.

Massaro knows how important it is to support players coming up through the ranks, with her brother Chris being the head coach at the National Squash Centre at Sportcity in Manchester.

The siblings recently teamed up to help re-launch the Manchester programme, which is aimed at getting more youngsters into the sport.

"The programme's been there since the Commonwealth Games when it was in Manchester," she said. "And it's been growing year on year. It was nice to see the success carrying on."

Sportcity is part of the legacy of the 2002 Commonwealth Games.

Squash is a core part of the Commonwealths and they're soon to return to Britain - to Glasgow, for the 2014 Games.

It will be ideal preparation for taking the stage as Olympians in 2020.

"For squash it's massive," Massaro enthused. "It [Glasgow] will be as close to having a home Games as you can possibly get for an English person."

She's not complaining, but Massaro is pushing for world domination for the sport she loves.