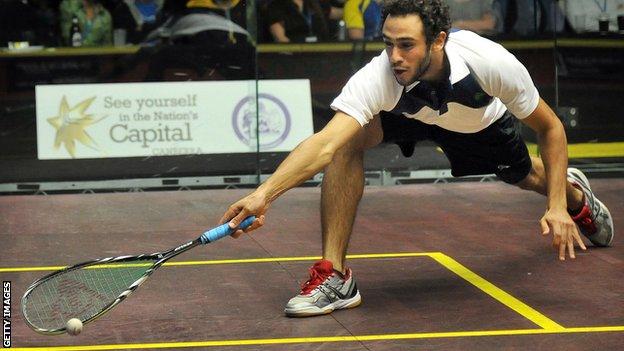 In early October, Egypt was gripped by hope and excitement as the national football team prepared for their World Cup qualifying play-off against Ghana.

But they fell to a 6-1 defeat in Kumasi and so, barring a sporting miracle in the second leg next month, will not make it to the World Cup for the first time since 1990.

In Manchester next week, the real stars of Egyptian sport will be expected to restore some national pride at the Men's World Squash Championships.

They will do so at a time when the nation is in crisis following the military overthrow of President Mohammed Morsi in July.

Mohamed El Shorbagy, one of five Egyptian players in the world's top 10, said: "We really wanted to qualify for the World Cup, but at the same time the amount of support that the footballers get from our government is unbelievable.

"It's much more than squash gets, but we do much better.

"We are competing at the world level and the footballers are nowhere near that."

Despite a rich history in producing world-class players dating back to the 1930s, it is hard to pinpoint exactly how, when and why Egypt became a squash superpower.

Amir Wagih, the Egyptian national coach between 1994 and 2012, says the former President Hosni Mubarak added impetus in the 1990s.

As a keen player himself, Mubarak increased government funding to the sport and brought the famous Al-Ahram tournament to the Pyramids.

The great Ahmed Barada, a future world number two, happened to be the most famous sportsman in the country and his emergence, according to Elshorbagy, was a seminal moment in Egypt's squash development.

"We always had someone to look up to and follow," said the 22-year-old.

Egypt's dominance at the top of the men's game, in particular, is obvious, but an even more impressive picture emerges further down the age groups.

The British Junior Open, for example, is among the most highly-regarded junior competitions in the world, and the under-19 men's title has been won by an Egyptian every year since 2006.

In the women's game, 13 of the last 15 winners of the under-15 title have been from Egypt. These numbers tell only part of the story.

"Around 600 children tried to qualify for the Egyptian championships and that is just in the under-11s section," said Wagih, who won more than 30 world titles as national coach.

"The game is massive. We have always had very natural, skilful, attacking players but back in 1994 we started studying what players were doing in England and Australia and copied their work ethic.

"Squash is a business now in Egypt."

For all the investment in facilities and coaches, Elshorbagy concedes that millions of poor children in Egypt will "find it very hard to play squash".

But participation levels remain high and they are being helped by the fact that many of the country's top players still live in Egypt.

"The juniors are watching, learning and playing every day with their legends," said Wagih.

"The players are contracted to clubs all over the country and it is written into their contracts that they have to play with the juniors.

"The under-13 British Open champion is Egyptian and he practises with Ramy Ashour [the world number one]. Imagine playing tennis with Rafael Nadal."

Other young and ambitious Egyptian players are taking advantage of the growing interest in squash in the United States, especially in the college system, and they are securing scholarships to Ivy League universities.

Achieving the required academic standard is often harder than being a good enough player, according to Wagih, who says it is not unusual for schools in Egypt to give promising pupils time off to develop their squash.

And that brings its own problems.

Wagih added: "The coaches are strict. A 15-year-old might be expected to train for between four and six hours most days.

"Every coach is trying to prove that his academy is the best - but the families are also very keen for their children to progress.

"This is a 'red light' moment [a warning] for Egyptian squash.

"Young players are getting injured, exhausted or bored - and that worries me."

Keeping the distinction between the 'business' of squash and the art of playing the sport is perhaps the biggest challenge facing the Egyptian Squash Federation.

In Elshorbagy's eyes, the great success of the system has had little to do with the sport's governing body.

Indeed, he blames the Federation for Egypt's defeat to England in the World Team Event in France earlier this year, saying they picked the wrong team.

He added: "I am not criticising any of the players - but when you have five of the world's top 10 players, you should not be losing that event.

"With the players we have, any governing body would have achieved the same level of success."

It will be difficult for Egypt to emulate the success they had the last time this Championship was played in Manchester.

In 2008, Ashour, Karim Darwish and Amr Shabana made it an Egyptian one-two-three.

Five years on, those three are among an even bigger pool of talented Egyptian players chasing the world's most-coveted title.

And unlike the footballers, they will take some beating.