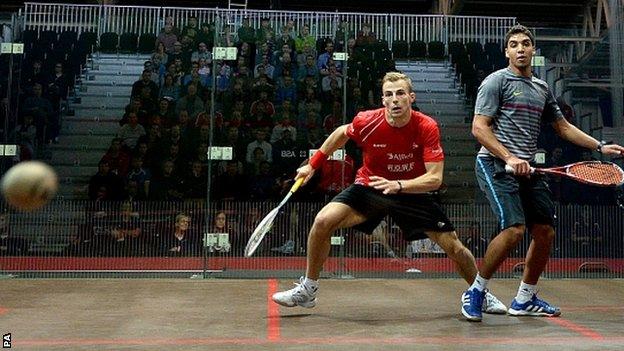 England's Nick Matthew and James Willstrop joined world number one Ramy Ashour in round two of the World Squash Championship in Manchester.

Matthew, 33, is looking to win his third world title and needed just 39 minutes to win his opening match at the National Squash Centre, while long-time rival and former world number one Willstrop, 30, saw off qualifier Hinds.

"I feel in the best shape of my career," said Matthew, who reached the US Open final last week before losing to Gaultier.

"It's easy to say that, I know, and I am sure you will take it with a pinch of salt, but I do feel in my best shape. There are two guys who have been better than me, but I am happy with my own game at the moment."

Ashour, 26, has not been beaten in a tour match since the 2012 British Open final against Matthew, and he continued that run on Monday after dropping the first game to Anjema, the world number 18.

The tournament will move across the city to the Manchester Central venue when the quarter-finals get under way on Thursday.