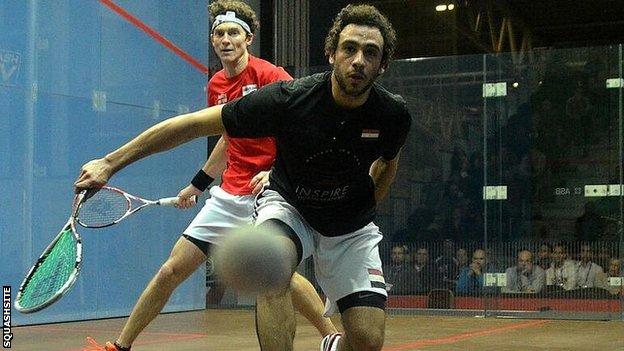 England's Nick Matthew and world number one Ramy Ashour remain on track to meet in the semi-finals after reaching the last eight of the World Championship.

Ashour, who won the first of his two world titles in Manchester five years ago, dropped the opening game for the second time this week but recovered to extend his unbeaten run to 48 matches on tour and 52 in total.

"Personally for me it's a massive achievement," said Ghosal.

"I hope this will be a big boost for the game in India - making it to the latter stages of this competition is a big achievement.

"I hope that it will get some recognition back home; not for me, but because it would be great to get more kids playing the game."

"Before I can even think about playing Ramy, there are a few more challenges to face before that match - a man that's got a few world titles under his belt," said Matthew.

Willstrop, who is travelling to and from his Harrogate home daily as his partner Vanessa Atkinson is overdue with their baby boy, beat ninth seed Borja Golan from Spain 11-4 11-8 11-6.

Willstrop next plays Mohammed El Shorbagy, the Bristol-based Egyptian who upset him when he was top seed in the World Championships in Doha last year.

The tournament moves across the city on Thursday from the National Squash Centre to the larger Manchester Central venue.