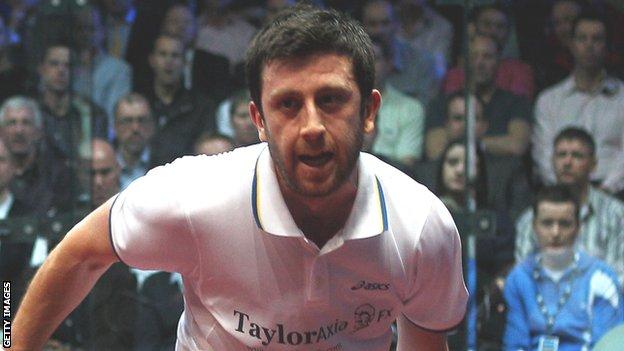 Essex's Daryl Selby has said his surprise progress to the last eight of the World Championship could lead to a peak in his career.

The 30-year-old, who is currently ranked 14th, faces second seed Gregory Gaultier in his first ever world quarter-final in Manchester on Friday.

"There might be life in the old dog yet," he told BBC Essex.

"I'm only 30 so hopefully there's plenty of time left for me to get into that top eight."

Chelmsford's Selby has a career-high ranking of ninth, achieved in April 2010.

He has joined two other Englishmen, James Willstrop and Nick Matthew, in the quarter-finals, with world number one Ramy Ashour - unbeaten for 18 months - also through.

Former British champion Selby will meet either Willstrop or Mohamed Elshorbagy, should he get past Frenchman Gaultier.

"It doesn't come much tougher than Greg Gaultier," he said.

"I've beaten him before. I know what I have to do, it's just whether I can do it on the day. But I'll be giving everything I've got to achieve my first semi-final."

"From an individual point of view it was fantastic to win and a rollercoaster of emotions," he said.

"I felt elated when I got back to the room last night. It's a massive win.

"This result should push me back into the top 10, which is a lovely place to be. I want to get into the top eight for the first time and establish myself there."