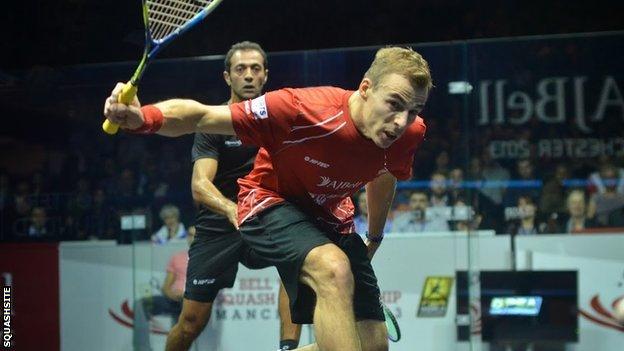 Nick Matthew produced a slick display to beat four-time champion Amr Shabana and reach the semi-finals of the World Squash Championship in Manchester.

Both Matthew and Ashour are trying to win the world title for a third time, and the Egyptian is without question the man to beat after dominating the sport for the last 17 months.

Matthew enjoyed the perfect preparation by seeing off Ashour's compatriot Shabana in 43 minutes, but said nerves had played a part as the tournament moved from the National Squash Centre to the larger Manchester Central venue for the latter stages.

"I felt it today," admitted the Yorkshireman. "I don't know whether it was the new venue or the occasion.

"You realise when you get to a certain age you've maybe not got too many more of them, but my wife Esme reminded me of a saying on the wall of the gym - 'If you're not nervous, you're not ready.' She just said to me, 'It means you're ready.'"

With the remaining two quarter-finals being played on Friday, Matthew and Ashour get an extra day to prepare for their semi-final.

"The nature of how well Ramy's playing, I think it will serve me well," said Matthew. "It gives me an opportunity to do my homework and get that performance today out of my system.

"I'll have a full 48 hours to prepare for it. You need 182 hours against Ramy at the moment, so I'll use them wisely."

Ashour had not been at his absolute best in the early rounds as he struggles with a leg injury, and he visited a local hospital on Thursday morning to check on the problem.

There were few signs of discomfort once he took to the court, however, and from 6-9 down he reeled off 14 of the next 15 points to take control of the match in a brilliant passage of play.

"I hadn't been enjoying my squash for the last three days and today was the first day I enjoyed my squash," said the Egyptian, who admitted he was playing through pain.

"I have a groin, hamstring [problem]; it all comes from a long, long time ago, because I've never been used to doing the right things.

"I consider myself becoming a real professional player maybe two or three years ago, but I've been playing this game for 20 years. I wasn't doing everything right physically, because I had no-one to tell me."

Asked about his unbeaten run of 53 matches - 49 on tour plus four at the World Team Championship - he said: "I'm not thinking about this. Whether it was 50 matches, 200 matches, I'll just keep doing what I have to do."

Looking ahead to Saturday's clash with Matthew, the last man to beat him in May 2012, Ashour added: "I hope it goes in his favour as well, so we can have a real match and neither of us has something wrong with him.

"This is better for both of us. So whoever wins, it's a certain win."