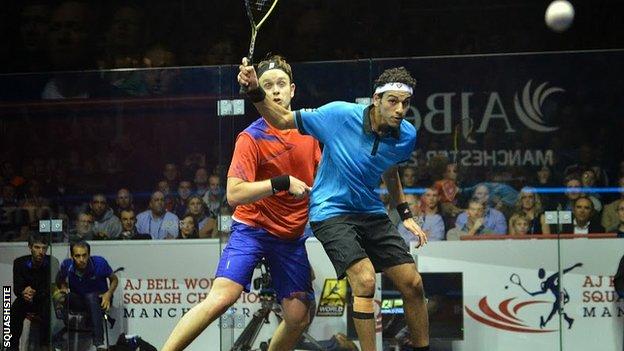 Elshorbagy will next play Gregory Gaultier after the Frenchman beat England's Daryl Selby 11-7 11-4 12-10.

World number one Ramy Ashour and fourth seed Nick Matthew will meet in the other semi-final on Saturday.

Willstrop, 30, was hoping to finally land the world title this week after twice finishing runner-up, but after a bright start he paid for errors at key moments.

The talented Elshorbagy edged a tight opener and the 22-year-old looked in total command when he doubled his advantage, but Willstrop stormed back in the third and was two points from forcing a decider in the fourth.

Two errors let Elshorbagy off the hook, however, and the Egyptian sealed a deserved victory after a video review on match ball.

"I lost context, I lost perspective. I don't like losing," said Willstrop, who had been travelling home to Halifax each night as he and his girlfriend expect their first child imminently.

"I was very poor at 9-7 [in the fourth game]. I thought the rest of the game was fine, but to do that at 9-7 - two errors on the trot - you just can't do that at this level. If those errors hadn't happened, who knows?"

Fellow Englishman Selby faced a tough task against Gaultier, who has looked in the kind of form to improve on his three runner-up finishes at previous World Championships.

Selby, seeded 13th, fought superbly and looked to be gaining the upper hand in the third, but Gaultier saved a game ball with a terrific backhand and closed it out two points later.

"I'm probably in the best shape of my life," said the 30-year-old US Open champion. "I've been playing well recently, especially the last two months.

"I came here with a lot of motivation and a lot of confidence, no pressure."