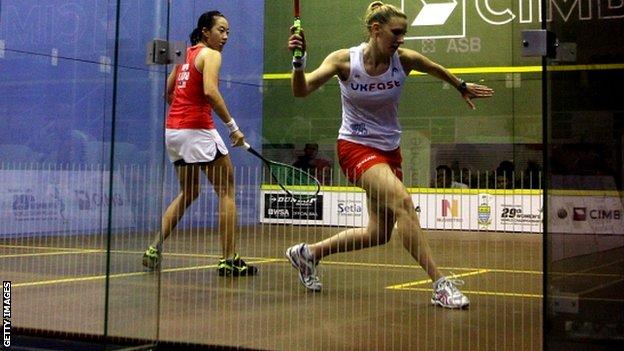 "I'm really proud of that match tonight, I gave it everything," said the 30-year-old from Preston.

Penang steps in to host Worlds

The tournament is in fact the 2013 World Championship, which is finally taking place in Penang after organisers failed to secure a venue during the calendar year. Nicol David is the big draw, her status evident in the fact that the event is being held at the Nicol David International Squash Centre.

The Malaysian superstar has not lost a World Championship match since 2007 and had a 12-0 career record against Serme, but the Frenchwoman put up a spirited display before David dominated the decider.

"These sort of matches actually get me going, so I will get adequate rest and be fresh for tomorrow," said the 30-year-old world number one.

At one hour and 45 minutes, Massaro's match against Wee Wern was the longest of her career and the second longest match in the 35-year history of the World Championship.

"This was definitely Wee Wern's best showing against me as she put me under so much pressure," said Massaro.

"It's a sign of how much she's improved - but I'm proud of myself for pulling through."

Top seeds David and Massaro remain on course for a repeat of last year's final, but Massaro must again get past Egyptian third seed Raneem El Weleily in the last four.

David takes on another Egyptian, Nour El Sherbini, in Saturday's other semi-final.