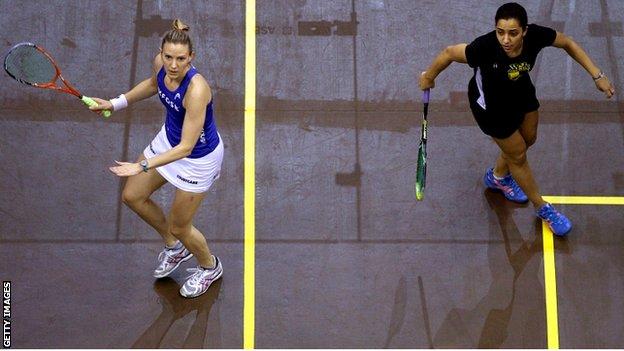 England's Laura Massaro will face Nour El Sherbini in the final of the World Championship after the 18-year-old Egyptian stunned champion Nicol David.

Malaysia's David, playing at her home club in Penang, had not been beaten in a world championship match since 2007.

The 30-year-old from Preston has the chance on Sunday to become England's first female squash world champion since Cassie Campion in 1999, and to match compatriot Nick Matthew's world-title victory of last November.

Massaro will face a surprise opponent in the final after world junior champion Sherbini produced a huge upset in front of 2,000 shell-shocked fans expecting home favourite David to reach her sixth world final in a row.

"Sherbini has just been on a roll throughout this tournament, and today everything worked out for her," said David after her first defeat in 10 months.

"Everybody plays their best squash with me, and today Sherbini played her best squash. I did my best, but it was just not my day today and fair play to Sherbini, she deserved that win.

"You never want to lose anywhere, and I obviously wanted to do well in front of my home crowd. It was disappointing, but I will learn from this defeat and wish both finalists the best."

Sherbini, the youngest semi-finalist in the history of the championship, said: "I have never beaten David before, never even taken a game off her, so I told myself that I would just go out there and do my best.

"But I never expected to get this victory - I'm still astounded how I achieved it."

Massaro recovered impressively from the longest match of her career against Low Wee Wern on Friday to beat El Welily in four games.

"Against Raneem it was more tough mentally because I didn't know whether she was going to hit a nick or the tin," said Massaro, the reigning British Open champion.

"But I felt that I was better physically and it definitely feels great to be in the final once more."

Massaro and Sherbini will meet for only the second time on Sunday, with the English player having won their Malaysian Open quarter-final in September 2012.