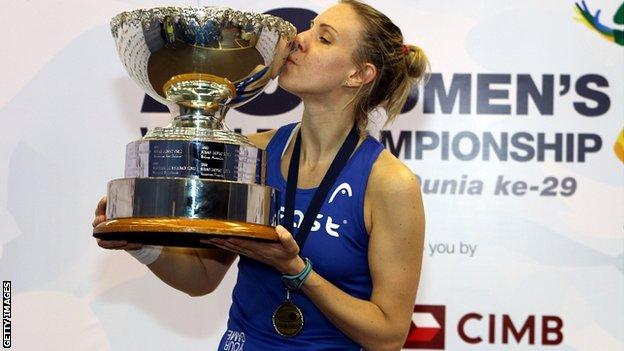 It was an emotional battle for me today

Massaro joins Matthew as a 2013 world champion after Penang hosted the event this week following the failure to secure a venue during the calendar year.

"For me and Nick to both be world champions at the same time is great," said Massaro.

"I'm so proud of what he's achieved as well. He's someone I really look up to, so to emulate what he's done by becoming world champion is very special.

"I never dreamed that I would be able to say that I was the British Open champion and the world champion, but now I can."

Malaysian Nicol David had won seven of the last eight women's world championships, including the last five, and had been a huge favourite to add another victory in front of her home crowd.

However, Sherbini produced one of the biggest shocks in the sport's history when and the world junior champion went close to taking the senior title against Massaro.

The 18-year-old Egyptian twice came back from a game down to force a fifth, and looked on course for a stunning win at 4-0 up in the decider.

But Massaro used her experience to haul herself level at 6-6 and from 8-8 earned two match balls at 10-8, converting the second to claim the biggest victory of her career.

"It was an emotional battle for me today. That's the hardest match I've ever played in my life, by far, especially knowing that I wasn't playing Nicol and that there was an opportunity there that I didn't want to miss.

"I felt really nervous, but I feel this whole tournament has been based around being mentally strong and being gritty when it counts, and that's what I'm most proud of.

"People actually have to beat me, they are never given the game."

Asked about her opponent, Massaro added: "She is the future of the game. I'm glad I managed to get a win while I still could."