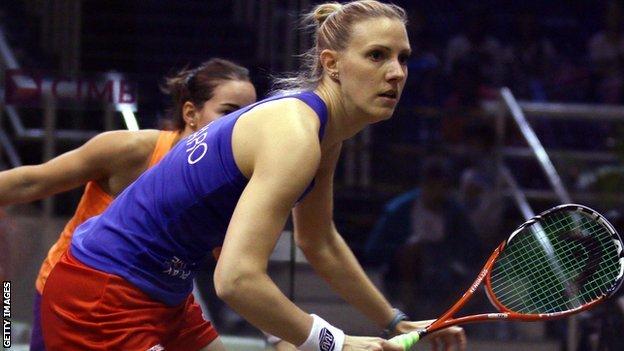 Massaro, who also in March, faces Hong Kong's Joey Chan, the world number 25, in the opening round.

"I guess now I need to stop celebrating my World Open win and start focusing on this," said Massaro.

World champion Nick Matthew of England is top seed in the men's draw.

Matthew is ranked second in the world behind Frenchman Gregory Gaultier, with fellow Yorkshireman James Willstrop and Egypt's defending champion Ramy Ashour likely to be among his leading rivals for the title.

Massaro will aim to match compatriot Janet Morgan's achievement of 1959 by retaining the title.

The 30-year-old from Chorley will make her 11th successive appearance in the main draw of the championship when she takes on Chan, whom she faced at the same stage last year.

"The strength and depth in the women's draw is really tough," said Massaro after Wednesday's draw. "I've actually got the same first-round draw I had last year, so I don't know if that's a good or a bad omen."

The tournament takes place in Hull from 13-18 May and, should Massaro progress, world number nine Annie Au - also from Hong Kong - is her likely second-round opponent.

A repeat of her World Championship semi-final against Egypt's world number three Raneem El Welily is the anticipated semi-final in the lower half of the draw, before a potential showdown with top seed Nicol David in a repeat of the 2013 final.