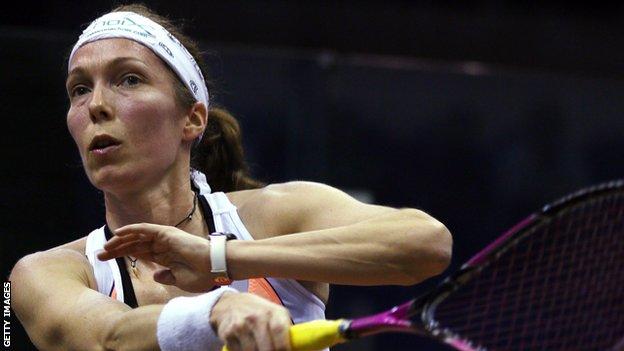 Northern Ireland's Madeline Perry has made squash history by becoming the oldest player to retain a place in the women's world top 10.

Perry celebrated her 37th birthday in February, two months after winning the Irish National Championship for a record 14th time.

The Banbridge woman slipped one place to ninth in the latest rankings from the Women's Squash Association.

Her highest ranking was when she was third in April 2011.

Born in Banbridge, in County Down, Perry first appeared in the world's top 10 in February 2006 and has played in 27 WSA World Tour finals and winning 11.

She has been selected to make a fifth successive appearance for Northern Ireland in the Commonwealth Games in August.

"I am proud to still be competing at such a high level and with the best players in the world," said Perry.

"I think I am playing so well at an older age firstly because I trained very little as a kid, went to university, and only after that trained seriously as a professional.

"I also have been very particular about planning my training as a professional, not overtraining and using physiotherapy regularly to keep my body in good shape."

Malaysian Nicol David remains the WSA number one for a 94th successive month while England's world champion Laura Massaro holds onto second place in the May rankings, ahead of Egypt's third-placed Raneem El Welily.