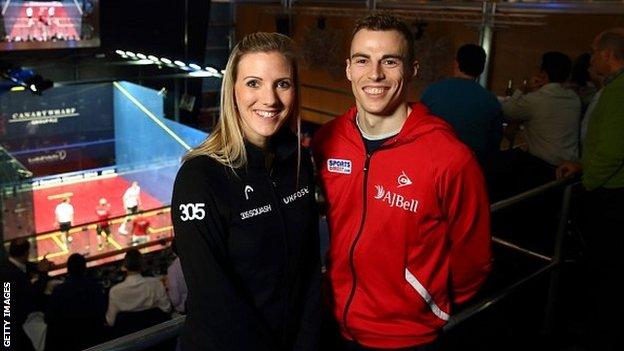 World champions Laura Massaro and Nick Matthew will seek to make it an English double at the British Open in Hull.

Massaro will try to become the first British woman for 55 years to defend the trophy while Matthew will chase a fourth title from Monday.

"I am aware of the history, but I'm also fully aware of how hard it is to achieve," Massaro, 30, told BBC Sport.

"I want it back, especially as we're playing in Yorkshire," said the top-seeded Matthew, 33, from Sheffield.

Men's top six in the world

Matthew is ranked second in the world behind Frenchman Gregory Gaultier, with fellow Yorkshireman James Willstrop and Egypt's defending champion Ramy Ashour among his leading rivals.

"It's the Wimbledon of squash - a very prestigious title," added Matthew.

"I learned a lesson last year when I lost in the semi-finals as I almost wanted it too much with all my friends and family there.

"But I'm trying not to build it up too much and get that balance right between preparing right physically but being mentally relaxed as well."

Massaro, who beat world number one and top seed Nicol David in last year's final, says the women's tournament is wide open as she seeks to match Janet Morgan's achievement of 1959 by retaining the title.

"The field this time is probably the toughest there's been for years," said the Preston-based player.

"Nicol David has been world number one for about seven years and she's still improving.

"But people are starting to beat her more than they have done, so I think anyone out of the top eight could win it."

Massaro, meanwhile, believes she is better equipped to challenge for a Commonwealth gold medal in Glasgow than she was four years ago.

She won silver in the women's doubles at Delhi 2010 but lost to eventual winner David in the last eight of the singles.

Women's top six in the world

"I really wasn't in any position to beat her. I've improved a lot since then," she said. "It's a realistic goal to go for a medal on an individual level."

Matthew is also targeting the defence of his Commonwealth singles title this summer.

"The beauty of the schedule is there's enough time to focus on both," he said.

"That's how my year has been built up - aiming to peak at the right time."