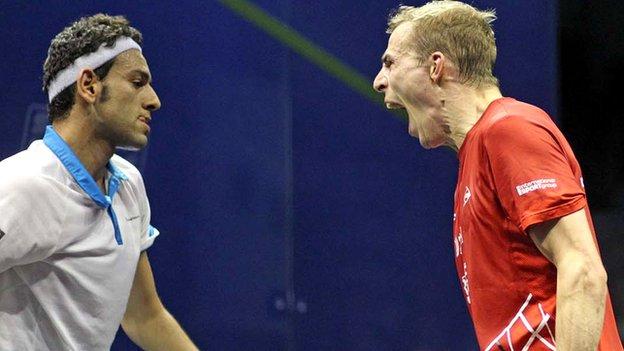 Matthew came through 3-2 in an epic match against Mohamed Elshorbagy of Egypt that lasted one hour 44 minutes.

He will play world number one Gregory Gaultier for the title on Sunday.

I was certainly running on fumes by the end

The Sheffield man will be trying to win his fourth British Open title when he takes on Frenchman Gaultier - who beat reigning champion Ramy Ashour of Egypt 11-7 12-10 3-11 11-7 - in a repeat of November's world final in Manchester.

The last time England had both the men's and women's British Open champions was in 1939 with Jim Dear and Margot Lumb.

Massaro, 30, is also looking to be the first Englishwoman to make a successful defence of the trophy since 1959.

"There's always pressure going into a final, especially when you're a defending champion," said Massaro.

"Playing Nicol there won't be pressure because she's world number one but it just comes down to playing my game plan as well as I can on each day."

"It's a repeat of the final last year, but I don't think we'll be doing anything differently we're just going to be playing our best squash in the final of the British Open and you should expect a really good battle," said the Malaysian.

Matthew, 33, is aiming to end the week strongly after suffering from a stomach bug during the earlier rounds.

"I was certainly running on fumes by the end, but now I feel the best I've felt all week."

Matthew is going for his fourth British Open title from four final appearances.

"There's a long way to go before I can think of that," he said.

"Gregory is world number one at the moment and desperately wants to win this title as well.

"We've had some great battles over the years - the World Open final was a hell of a match nearly two hours long. It'll be another attritional match, a real physical and mental battle."