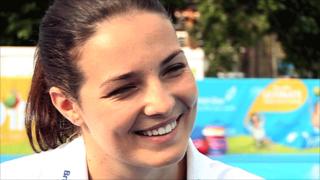 British swimmer Keri-Anne Payne tells BBC Sport correspondent Matt Slater she is not guaranteed the 10k open water gold medal at London 2012, despite coming out on top at the World Championships last month.

The 23-year-old has already booked her place at the Olympics after winning the event in Shanghai, but says she is not "expecting to win" as she can only control her own performance.

Payne, who won silver at Beijing 2008, adds that she is relishing the prospect of next year's Games and believes the home crowd will help inspire the British swimmers to success.